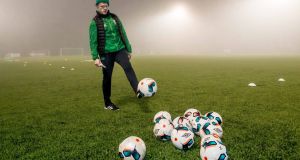 Damien Duff was an underage coach at Shamrock Rovers before moving to Celtic. Photo: Morgan Treacy/Inpho

The FAI has confirmed that former internationals Damien Duff and Keith Andrews will be part of Stephen Kenny’s coaching staff. Alan Kelly, who had returned as goalkeeping coach under Mick McCarthy, retains his position while Terry Connor and, it seems, Robbie Keane will be departing.

Jim Crawford, who had been one of Kenny’s assistants at Under-21 level over the past year or so, takes over at that level while former Manchester United and Sunderland star John O’Shea, who is currently part of Reading’s coaching set up, comes in as his assistant.

“I’m excited to see the coaching staff that has been appointed,” said former Ireland skipper Kenny Cunningham on Newstalk shortly after the announcement was made.

“I think it was obvious that Keith Andrews was going to move up along with Stephen, the pair have worked well together with the Under-21s and Jim is a good choice for the Under-21s. John O’Shea is just starting his coaching career with Reading and it’s great to have him involved while Damien, who has been doing great work at Celtic... the qualities he has will help Stephen.”

The one obvious omission from the FAI statement is Keane, who had previously made it known that his contract with the association ran significantly beyond McCarthy’s at the end of July.

His appointment as one of the assistants to McCarthy had been very much down to John Delaney rather than the manager and it is no great surprise that Kenny has wanted to pick his own people. It is not entirely clearly yet, however, whether another role might be offered to the Dubliner, who is also currently working with Middlesbrough.

“The calibre of Stephen Kenny’s backroom team is top class and these are great additions to our senior team coaching staff,” said the association’s Interim CEO Gary Owens, with regard to the appointments that have been made.

“Keith and Damien served Ireland so well as players and their experience will be such an addition to our senior squad’s support team. Keith and Stephen have worked brilliantly together with the Under-21 squad and Damien, currently finishing his Uefa Pro Licence with the FAI’s Coach Education department, has impressed everyone with his coaching skills and his switch from world class player to coach.

“Alan knows international football inside and was part of the squad at two World Cup finals. He is highly regarded as a coach with Premier League side Everton and has huge experience with Ireland. Together, Keith, Damien and Alan have so much to offer Stephen and his players as we look forward to the Uefa Euro 2020 Play-Offs, the Nations League and the World Cup qualifiers.”

“Everyone at the FAI,” he added, “is delighted with Jim’s promotion to manager from assistant and he has a great number two now in John O’Shea as he takes the next step in his coaching career.”