What happens when an Irish prospect doesn’t make it in England? 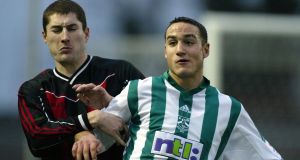 Few of the young Irish footballers who head for Britain each year will fulfil their dreams, but in many cases the disappointment of those who return is compounded by doubts about whether it might all have all turned out differently.

There are countless unseen reasons for the collapse of a young player’s career prospects. And while lack of the required talent is obviously a factor sometimes, years later teammates or coaches can still seem at a loss as to how that kid who had it all failed to make it. For the player himself, of course, the sense of shock is rather more profound.

“England breaks a lot of people,” says Eamon Zayed almost 20 years after it might have broken him. “I know a lot of lads who didn’t make it and then came home and fell out of football completely. But the problem is that if you want to make it in the first place, you have to have confidence in your own ability and be completely focused. It’s very hard to tell a lad in that position that they have to be prepared for it not all working out; that they have to get their education or whatever.”

Zayed turned down his first opportunity to go to England after an extended summer trial at Arsenal went really well and he was offered a good contract by Liam Brady. He had a year to go before his Leaving Cert and when his mother phoned the club with the aim of deferring the deal, Brady, he recalled, listed countries where the club’s scouts were offering alternatives. “If he doesn’t come over now,” the message was, “we will just take one of those”.

He stayed at home but a year later was signed by Leicester City where he made good progress and featured in some preseason friendlies the following summer by which time he sensed he was edging his way into the first team squad.

The team was going poorly, though, and after a change of manager, Zayed’s progress was halted, he still feels, by a training ground dispute with a coach over what constituted a valid goal under the made up rules of a five-a-side. The sense of bewilderment is still apparent as the striker, now in his second season with USL side Chattanooga Red Wolves in Tennessee, recalls an incident which ended with balls being fired at him as he was effectively banished back to the youths.

“When you’re a lad of 16, 17 or 18 coming from a schoolboy club in Dublin where you have been one of the better players and everyone loves you, that’s a shock,” he acknowledges. “But that’s the way it is in England. It’s brutal. If they like you it’s fantastic but so much depends on first impressions and if they don’t like you, you’re f****d.

“Suddenly somebody doesn’t like you and they are treating you like shit. I can understand somebody going away, ending up in a situation like that and becoming disillusioned.”

The challenges are many and varied. Stephen Bradley has pointed to the moment he checked his bank balance at ATM while at Arsenal and got it into his head that he had already made it. Brady, once again, had the task of persuading him that there was actually still some way to go but, the current Shamrock Rovers manager suggested a couple of years ago he never quite recovered from suddenly feeling he had money.

Mikey Drennan, who just 12 when he went on his first trial to a club in England, had little enough of that at Villa where he signed for a year as a “scholar” on £110 a week on the basis that he would then get two seasons at £500 a week. “The club told me in my third year,” he remembers ruefully, “that I could have got a lot more.”

By then, despite having done hugely well initially, he knew he was unlikely to get the new, much improved contract that everybody in an academy is fighting for.

At one stage, he recalls, he was flying, with goals galore for both Villa’s development team and Ireland but “then while I was celebrating a goal I had scored against Ajax I broke my foot and it all went downhill from there.”

He believes the injury was badly handled but, struggling, he started to drink at home, and put on weight. Having been one of the squad’s hot prospects just a few months before, he found himself being singled out for deep abuse at team meetings.

He suggests the attention might actually have been well-intentioned, an attempt to motivate him to get back on track but the effect on his already fragile morale was entirely negative and his slide continued until his contract was up and returned home. He has since had spells at Shamrock Rovers and St Patrick’s Athletic while harbouring an ambition to hurl for his county.

For Brandon Payne, it was not just one injury that scuppered his prospects of making it at Celtic but a remarkable succession of them, a run that started before he had even formally joined the club when he broke his leg while playing in a friendly for Lucan United.

Payne had been in demand but had chosen the Scots because, he recalls: “They came in and asked me over and then looked after me well. They collected us, brought us wherever we wanted, put us in a lovely hotel. Put my Ma and Da in the directors’ box for a Champions League game. They showed us that they really wanted me.”

After the injury, Celtic sought to cancel the deal they had given him, then offered a new one on reduced terms when he appeared to recover. But the now 22 year-old then suffered two serious knee injuries as well as ankle, groin and quad problems while in Scotland. After a promising start, the setbacks prevented him from ever building any sustained momentum at the club and by the start of his final year there he was under no illusions about his longer term prospects.

“You think it’s going to be great but the next thing a coach doesn’t like you and you are sitting on the bench for a few months and going back to digs each day by yourself.” In the end, he remembers thinking, “’I was one of the best players in Ireland and now I’m being released’.” It was not, he says, an enjoyable experience but still he would advise others to take the same chance if they got it.

A couple of years on, he is playing again, injury free, with Bluebell and still open to the idea that football might work out him.

Colin McCabe, now at Shelbourne, was at Celtic for much of the same time having left school in Cavan a year earlier to join the club. There is no great drama in his account of what followed, just hard work and a hope that things were going to work out until it started to become apparent they would not.

The goalkeeper’s progress seems to have been what a young player could have hoped for until, after a good year in which he had trained regularly with the first team squad, he took the obvious next step of a loan move; to Stenhousemuir where, he felt, he learned a lot.

“I was doing well but because I wasn’t there at Celtic, it gave somebody else a chance to step into my spot,” he says. “You’re taking risks. You’re going to teams where the defenders aren’t as good so suddenly you are more exposed. But it felt like the right thing to do.”

Now, though, younger rivals were getting the opportunities that he had previously seen as signs that he was on the right path.

“I could see it coming,” he says of his eventual release. “I was at Celtic during the day and I would have seen the younger keepers getting the chance to train with the first team while I’m suddenly with lads who are two years younger than me.

“As a footballer,” he concludes, you have to understand that it is a business. It’s brutal, a really hard industry with players from all over the world who will be very happy to take your jersey.

“When I signed from Celtic I was probably taking some Scottish lad’s jersey so what goes around comes around. Obviously I wish it hadn’t. But it did and you have to try to just take that in your stride.”

This is the fourth article in a new series focusing on youth development in Ireland. You can read each part in The Irish Times and on irishtimes.com/sport every day this week.

1 Andy Farrell hands Billy Burns first Ireland start against Georgia
2 Keith Duggan: Through the glories and the disgraces, we were all Maradona addicts
3 ‘God is dead’: The world’s front pages remember Diego Maradona
4 GAA Statistics: Can Cavan and Thomas Galligan beat Dublin with the long kickout?
5 Rugby Stats: Blame game at lineout time is on the whole team
Real news has value SUBSCRIBE
Crossword Get access to over 6,000 interactive crosswords