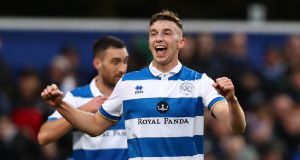 Niall Harrison, the head of the FAI’s Emerging Talent Programme, is one of many around the Irish game who speak well of Brighton, the way they do their business and treat the young players they bring from overseas to their academy.

He knows its manager, John Morling, of course, from the days when they worked together at the FAI and has met the club’s education department, speaks highly of the work they do with young Irish players. Harrison appreciates the difference the resources at a club like that can make and yet, he says, he would dearly love to see more players stay at home and seek to start their professional careers in the game here.

Brexit, however unintended, might just be the beginning of something better, he believes.

“It’s hard to know what will happen,” he says. “But one thing that I do think will come out of it is that it will be the best of the best that will move to foreign clubs.

“There have been a lot of instances down the years where 30 players go across in a season. I would have looked at some of those and thought: Do you know . . . I just can’t see it working for him.

“The top players, the Jack Byrnes, the Conor Mastersons, those boys, you’d be thinking: ‘they’ve got a chance, a real chance’. There are no guarantees for anyone but players like that have a chance even if they don’t quite make it at the club, which is very difficult at the sort of clubs they went to. But we’ve seen Conor drop down a division and start to establish himself in the first team at QPR before the season was suspended and Jack’s done well since coming back to Shamrock Rovers.

“It’s frustrating, though, that a lot of the players go away then get dumped and when it happens, it is hard to see any progress. But I think with Brexit it will only be the top boys that go and if they have to be 18 then they are certainly going to be that bit more mature. Some of them might have played in the National League. And done their Leaving Certs. I don’t think any of that would be the end of the world.”

The underage leagues here, intended to provide an alternative pathway for those who do stay, are not what they could be but he suggests they are much better than many give them credit for.

“I love the leagues and don’t understand why there is so much negativity towards them,” he says. “Look at Belgium, Holland, Spain Croatia. the best players are at the top clubs playing against the best players.

“In the DDSL, as it was, there was some chance because they had five or six tough games a year, but for lads outside Dublin it was far more difficult because those games were not there. There were lads who were never seriously tested, who went years without losing a game then couldn’t handle it when they did.

“There are clearly flaws, but we are only getting started. We need to fill in those age groups where there are gaps. Certainly that gap between 13s and 15s is a problem; I think everybody recognises that . . . including the people within the FAI who have a say in these things.

“I still think there is a big gap between under-19 football and the first team at a League of Ireland club too. At the likes of Shamrock Rovers or Dundalk, in particular, but it’s a big jump everywhere really.”

Money, he readily admits, is an issue. “I think each underage team costs around 25 grand to run. So you have clubs now who have 13, 15, 17 and 19 and women’s under17s; that’s five teams, €125,000 before you look at the senior team. That’s the case in Sligo Rovers where the money is being raised from the community

“I think there’s a real balance to be struck there between the business of football and the structure of the game as it is intended to serve the players.

“But the leagues are important and a player coming through the 13s, 15s, 17s and 19s and then making it to the first team, that will be the sign of real progress for me. Some of the best players will still move abroad and that’s okay. But there will be players who stay, and some who come through late before moving at 21 or 22 too. Who is to say that they won’t still end up being king of the castle.”