Aaron Ramsey may have played last game for Arsenal after injury 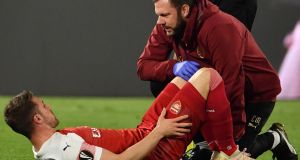 A staff medic tends to Arsenal’s Aaron Ramsey after he was injured during the UEFA Europa League quarter-final second leg against Napoli. Photo: Andreas Solaro/Getty Images

Aaron Ramsey’s farewell game for Arsenal is in the balance after he limped out of the Stadio San Paolo with hamstring damage suffered during the Europa League quarter-final against Naples.

The midfielder who leaves to join Juventus in the summer faces a race against time to play for Arsenal again. Unai Emery’s expression was doubtful as he considered how likely that prospect is. The best he could offer was a cautious, “I don’t know.”

He was disappointed to lose such an influential player when Arsenal are attacking two routes back into the Champions League. “It is a muscular injury. Normally it is some weeks outside the team.

“He was in a very good moment, with big behaviour and commitment to do something important. His injury today can give us some matches without him,” Emery said. He is unlikely to figure in the semi-finals against Valencia.

Arsenal’s final Premier League game at Burnley comes three weeks and three days after this injury so Ramsey would have to recover speedily to play again domestically before his departure. There is a stronger chance he will at least make another appearance if his team manage to reach the Europa League final, which takes place a shade under six weeks’ time.

It was the one sour note on an otherwise excellent match for Arsenal as they completed a 3-0 aggregate victory thanks to a composed team performance embellished by Alexandre Lacazette’s free-kick. Once that goal went in the tie was never in doubt.

Emery was delighted and felt his team put in a heroic shift. “I am very proud of my players and of our work,” he said. “We show the players have the habit to play matches against good teams, in a good atmosphere, and show big personality.

“I don’t know if it’s our best performance but it is good after our victory on Monday at Watford. To repeat that against Napoli in the second leg, keeping our clean sheet and also winning this match against a very big team is important for us to be consistent.”

Arsenal play Crystal Palace at the Emirates Stadium on Sunday, before difficult away games at Wolves and Leicester. – Guardian