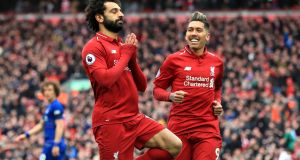 It was an arrow into the top corner of Chelsea’s goal and potentially the hearts of Manchester City from Mohamed Salah. Liverpool cleared the most daunting hurdle remaining in their pursuit of a first league title for 29 years with a flash of genius from their Egypt international. Two points clear with four games to go, Jürgen Klopp’s team have piled the pressure on the champions with character and class.

Parallels with the Chelsea game that cost Liverpool the title five years ago ran only as far as a 2-0 scoreline and a slip in possession from Andy Robertson that went unpunished. Otherwise this was an afternoon of joy and release for those in red. Sadio Mané set Liverpool on course for a seventh successive victory in all competitions with a powerful header early in the second half. Seconds later, 142 seconds later to be precise, Salah sent Anfield wild with perhaps the finest goal of his prolific Liverpool career. His 19th of the season could have major implications for Liverpool’s hopes of a 19th league crown.

It did not take long for Chelsea supporters to revisit recent history in an attempt to stir anxiety among the Anfield crowd. Eight minutes before kick-off, in fact, was when the first rendition was aired of the Steven Gerrard/Demba Ba song. Only two players remained from that infamous game in April 2014, however, César Azpilicueta and Salah, and the latter was wearing blue that day. The most important sound from the crowd before the game was of course silence for the victims of the Hillsborough disaster on the eve of the 30th anniversary. It was impeccably observed by all, as one mosaic reading ‘30 Years’ filled the Sir Kenny Dalglish Stand and another that simply said ‘96’ dominated the Kop.

The following 45 minutes were subdued, cagey and far removed from the monumental occasion it would eventually become. Liverpool started on the front foot but without the aggression and composure on the ball that so often makes their control count. Maurizio Sarri’s side, with Eden Hazard operating as a false nine, were content to work their way into promising situations on the counter-attack but unable to work Alisson in the Liverpool goal. Their first half display was encapsulated by the dangerous Willian breaking from a David Luiz clearance, cutting inside Virgil van Dijk and Jordan Henderson, then slicing well wide from 18 yards out.

Liverpool’s best chance of the first half fell to Salah in their first genuine attack. Mané, who unnerved Azpilicueta from the opening whistle, delivered a deep cross into the visitors’ six-yard box to the Egypt international. Unmarked, he shinned his volley straight at Kepa Arrizabalaga. Mané turned another good opportunity wide when Salah returned the favour later in the half but overall it was a flat opening reminiscent of that game from five years ago. A jaw-dropping start to the second half by Liverpool ensured there would be no repeat of that.

Until Mané struck his 18th goal of the league campaign the most significant moment was the knee injury sustained by Antonio Rüdiger when chasing a Joel Matip ball over the top towards Mané. The Chelsea central defender had started authoritatively and laboured on for a further 18 minutes before collapsing once more. He looked in a bad way when carried off the pitch by two members of the Chelsea medical staff. Rüdiger’s replacement, Andreas Christensen, came on for only his fifth league appearance of the season and was that rusty he spent the half-time interval warming up on the pitch. He and his team-mates were caught cold from the restart, however.

The game, the atmosphere and quite possibly the title race turned six minutes after the restart when Matip picked out Salah with a measured pass out of defence. Liverpool’s leading marksman played a one-two with Roberto Firmino that should have been cut out by Emerson. The Chelsea left-back was weak in the challenge, Henderson nipped in ahead of Jorginho and floated a delightful cross over from the by-line for Mané to head home. Arrizabalaga tried desperately to claw out the Senegal striker’s header but there was no stopping that at such close range.

A collective gasp could be heard around Anfield 142 seconds later when Salah sealed a most precious victory with a shot of exquisite beauty. He was lurking in a similar position to the opening goal when he received a crossfield pass from Van Dijk. This time he stepped across Emerson and, before the Chelsea defence could set itself, unleashed an angled drive that flew straight and true into the top corner of Arrizabalaga’s goal. An unforgettable moment that saw Klopp look on in joyous disbelief and over 50,000 others follow suit.

Liverpool were rampant at this stage, Firmino flashing another shot from distance just wide, yet strangely Chelsea could have levelled courtesy of two glorious Hazard chances in as many minutes. The Belgium international had only Alisson to beat when Christensen’s long ball caught out the Liverpool defence. He beat the Liverpool goalkeeper only to see his low shot smack against the post. Seconds later, from Willian’s inviting delivery, his free shot was spilled by Alisson and Van Dijk hooked clear before Hazard could capitalise on the rebound. - Guardian