TV View: Pundits distracted by off-field events as Souey and Son keep eyes on the ball

Scot was left looking flustered, him being more familiar with 4-3-3s than Clause 4.3s 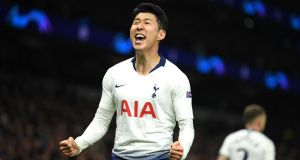 A mouth-watering humdinger of a midweek for football fans with five tantalising clashes in the fixture list, starting last night with Spurs v Manchester City and Liverpool v Porto, followed today by Ajax v Juventus, Manchester United v Barcelona, and the Oireachtas Committee for Transport, Tourism and Sport v the Football Association of Ireland. And barring, maybe, the Liverpool game, all too close to call.

It was with the fifth of those contests that our RTÉ and Virgin Media panels began, in light of the news earlier in the afternoon that Sport Ireland had, so to speak, flung a pile of tennis balls at the FAI by announcing that they were suspending their funding.

All our pundits thought that was a perfectly reasonable decision, what with Clause 4.3 of Sport Ireland’s Terms & Conditions of Grant Approval not being complied with, Graeme Souness the only one looking flustered, him being more familiar with 4-3-3s than Clause 4.3s.

Graeme, then, opted to remain a spectator on the issue, while wearing a face that read, ‘Holy Jesus, maybe the Scottish FA aren’t so bad after all’, Brian Kerr noting that in the last couple of weeks “we’ve had more statements from the FAI than the Bank of Ireland would issue in a year”.

This is true, those on their emailing list left with jammed inboxes, the statements even outnumbering requests for bank account numbers after being bequeathed several billion following the unfortunate death of a random prince in a car accident.

Indeed if you printed out all the statements issued since the eruption of #Loangate, you’d think you were looking at War and Peace. The problem, though, as Kerr and Kevin Kilbane pointed out, as did Richie Sadlier, Liam Brady and Kevin Doyle over on RTÉ, come the end of reading these statements, you’d feel much the same upon completing War and Peace. None the wiser.

“And we now have three different consultancies being paid to investigate the FAI, along with an internal committee that is investigating itself,” said Kerr, all of which was making the Robert Mueller investigation into Trump/Russia seem transparently uncomplicated.

By now, evidently, nothing would surprise Kilbane, even revelations that Vladimir Putin was part-funding FAI operations. “We’re looking for answers, but I’m not sure we’ll get them,” he said, suspecting that the Oireachtas Committee would have to go on the attack in a 0-0-11 kind of way if they are to pierce the FAI’s defence.

Brady, meanwhile, said he’d prefer our national team to miss out on qualification for the next Euros if nothing had changed in the interim, because “if we get results and qualify nothing will change”.

“People like Brian Kerr,” he continued, “who have enormous expertise in this area [development of young players], have just been ignored. And this is wrong. The average age of our team against Georgia was 29 – where are our young players? My beef over the last few years has been the lack of development of our young players, especially in the hotbeds of Cork and Dublin. We don’t have 19-year-olds in the Premier League. England do. The FAI is responsible for that.”

The man himself, back on Virgin: “It’s time for reform and a complete change of that board, they’ve been there far too long, well past their sell-by date, but they’ve hung in and hung in.”

Souness, though, only had one question.

“Why is Fabian Delph playing?”

We were back to actual football, then, and Souness was befuddled by Pep Guardiola’s team selection, the inclusion of Delph suggesting to him that the City gaffer was trying to avoid winning the quadruple.

This, of course, was somewhat harsh on Delph, although Souness saluted most of the rest of the City line-up, dismissing Tommy Martin’s suggestion that they might be intimidated by playing in Spurs’ shiny new stadium. “When you’re a big player, Tommy,” said Souness, “this turns you on.” Tommy was sorry he’d even raised the issue.

As it proved, City weren’t turned on at all, certainly not Sergio Agüero that moment he had his penalty saved. Son Heung-min, though, was all a-tingle when he netted the only goal of the game.

The FAI could probably do with the fella when they take on the Oireachtas Committee for Transport, Tourism and Sport, such is Son’s knack for proving elusive and popping up with a winner. Without him, it’s likely to be war, with little peace.

1 The game they loved so well: How cricket united Hume, McGuinness and McCann
2 Andy Farrell admits Ireland net may need to be spread wide in the autumn
3 Bryson DeChambeau’s driver snaps on seventh tee at US PGA
4 Rory McIlroy steadies the ship after shaky start at US PGA
5 Brain as well as brawn on Sexton’s lockdown menu
Real news has value SUBSCRIBE