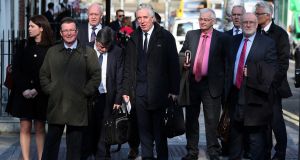 The chief sponsor of the Football Association of Ireland (FAI) has said it regards good corporate governance as being of the “upmost importance”.

In its first statement since the Oireachtas hearings into the FAI, Three Ireland said it expects the same standards of corporate governance “from all partners we work with”.

Three Ireland signed a five-year sponsorship deal in 2015 with the FAI worth €8.9 million. The telecom company has bought exclusive branding rights to include training and playing gear and kit for the international teams.

The FAI has commissioned two reports into the circumstances surrounding a €100,000 cheque from then-chief executive John Delaney in April 2017 that Mr Delaney, now executive vice-president, lent to the association because of a cash flow problem.

Three Ireland yesterday noted both reports and said it expects “all recommendations to be implemented”.

Three Ireland has become the second major funder of the association to question the FAI’s governance structures.

Sport Ireland has already said it will withhold nearly €1.45 million in funding - half its grant allocation for the year - because of the FAI’s failure to notify it of the €100,000 cheque.

The FAI has admitted it breached the terms of its grant which included a stipulation that any material deterioration in a sporting body’s finances must be notified to Sport Ireland.

Sport Ireland added that the board will consider the reinstatement of funding once all ongoing reports commissioned by the FAI have been completed and the recommendations adopted.

At the Oireachtas committee on tourism, transport and sport on Wednesday Mr Delaney said he was precluded from answering any questions about the €100,000 loan or about his 14 years as chief executive of the FAI.

Committee chair Fergus O’Dowd said it would be in the best interests of football in Ireland if the board of the FAI stepped down.

A spokeswoman for the Oireachtas said the live stream of the committee meeting was viewed 95,134 times on the parliament’s website.

The spokeswoman also said a Facebook Live broadcast of the meeting reached 6,202 people and included viewers from Australia, Germany, the Netherlands, Brussels and Nigeria.

Siptu representative Denis Hynes has written to Sport Ireland seeking clarity on the decision to withdraw funding from the FAI.

Mr Hynes said he represented 50 development officers directly employed by the FAI who earn between €35,000 and €37,000 a year.

He said his members were worried they would become “political footballs” in the row between the FAI and Sport Ireland over funding.