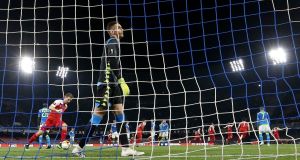 For all the moments this season when critics have scratched their heads struggling to put their finger on what the identity of Unai Emery’s Arsenal is, a masterclass of a European quarter-final showcased everything they are capable of. This was a responsible, smart performance from back to front that eased them into the semi-finals of the Europa League.

They did it by ticking every box required for a tough overseas assignment: they maintained composure, Alexandre Lacazette scored a sumptuous away goal, the home crowd lost their voice, the Napoli team lost their will. Arsenal sure picked their moment to discover the key to a classic away performance.

It sounded peculiar in the build-up to this European encounter to hear Carlo Ancelotti, he of the three Champions League titles, sweetly praise Emery for his mastery of the Europa League. Whatever the secret to his midas touch in this particular competition, it is clear that Emery has given his team the confidence and organisation to feel they have as much chance as anyone of reaching the final in Baku. The next team in their way is Valencia, Emery’s old club.

The quest for silverware, and for a route back into the Champions League either through this competition or the Premier League top four, remains alive and enticing.

Unai Emery had called for his team to play with courage and in this atmospheric bear pit of a stadium, which reflects the raucous and anarchic soul of its city, plenty of character was needed. Arsenal’s hardship on their travels is no secret. A rare away win at Watford last weekend was much squeakier than it should have been, and the team arrived in Italy having lost both their previous knockout games in the Europa League.

With a 2-0 first-leg advantage behind them, Emery had promised to send out a side intent on winning, and his team selection reflected his desire to take the initiative wherever possible. The balance that has proved so elusive in many of their away trips this season felt more important than ever, and the team contained enough experience to try to get a foothold, and enough attacking craft with both Pierre-Emerick Aubemeyang and Alexandre Lacazette leading from the front.

If Emery could have written a script for the first half it would have looked very similar to what played out, with the exception of the injury to Aaron Ramsey, who withdrew half an hour in clutching a tweaked hamstring. Other than that he saw his team demonstrate a mix of defensive diligence and calm concentrated heads to largely frustrate Napoli, before Lacazette seized the away goal that would transfer so much more tension and desperation on to their opponents.

Arsenal were in no mood to get sucked in and kept more than their fair share of early possession. In the ninth minute Ramsey claimed for a penalty but the Romanian referee Radu Petrescu was unimpressed.

Napoli were beginning to look a bit befuddled by their own lack of cohesion and direction, but all of a sudden, a quarter of an hour in, Arsenal allowed them to break as they lost possession carelessly. Carlo Ancelotti’s men surged upfield into a three-on-two attack, and the advanced Kalidou Koulibaly swept a beautiful pass across for José Callejón. The Spaniard’s angled shot was smothered by Petr Cech. It proved a key moment - preserving an advantage when the pressure was on felt paramount.

Napoli squandered another inviting opportunity soon afterwards, in the clear for an aerial attempt, unmarked and free to pick his spot. He got his angles wrong and guided the ball wide.

Half an hour into the game Emery was forced to reshuffle as Ramsey was replaced by Henrikh Mkhitaryan, whose performance at Watford had made it look as if he was playing with his shorts back to front. His impact here, however, was direct, quick and decisive as he immediately helped to knit together a productive Arsenal attack. When Lacazette was chopped down outside the box by Nikola Maksimovic, the Frenchman was focused to take full advantage. His free-kick from 25 yards was whipped in with a wicked curl, and Arsenal had a crucial away goal.

Ancelotti tried to shake things up at half-time, bringing on a goal threat in Dries Mertens with his team now needing four of them. Arsenal could have obliterated that chase altogether with a dazzling chance three minutes after the break. Mkhitaryan slid a pass across to Aubameyang, whose shot was turned over spectacularly by Alex Meret.

Napoli huffed and puffed as they tried to salvage some pride but their end product was wayward and caught up in their frustration. Missed opportunity after missed opportunity was greeted with disbelief in the crowd. It felt oddly like Arsenal were controlled enough to allow Napoli chances without worrying that there was major damage in store.