FAI: Failure to notify authorites of Delaney loan did not obey funding rules 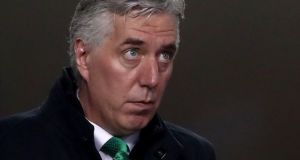 John Delaney will appear before an Oireachtas committee to face questions about a €100,000 loan he gave the organisation in 2017. Photograph: ©INPHO/ James Crombie

The Football Association of Ireland (FAI)’s failure to notify authorities of former chief executive John Delaney’s loan to the organisation did not obey State funding rules, it conceded this evening, just hours before leading FAI members appear before TDs and senators.

The Association also acknowledges inaccuracies in its initial public response about the controversial €100,000 payment after it was disclosed last month.

The FAI confirmed on Monday evening that Mr Delaney will be one of five executives who will appear before the Oireachtas Committee on Transport, Tourism and Sport on Wednesday to answer questions on governance issues.

In a lengthy opening statement to the committee, FAI president Donal Conway acknowledges that public comments made by the association about the €100,000 payment “did not not accurately reflect the Board’s level of awareness of the existence of the (payment).”

Mr Conway also discloses that auditors Grant Thornton have been on site at FAI headquarters since last week conducing a comprehensive review of all books and all ledgers.

Fine Gael TD Fergus O’Dowd has already outlined the the topics, which revolve around governance in the association. Of most interest will be the loan given by Mr Delaney to the organisation in 2017 and the reasons behind it.

Mr Delaney stepped down from his role as CEO last month to take up a new role as executive vice president. He also retains a senior position with the the Union of European Football Associations (UEFA).

Mr Conway will tell the committee on Wednesday the “involvement of Grant Thornton also allows the addressing of queries raised regarding the € 100,000 issue from 2017 to ensure the response to queries is comprehensive and accurate” .

He also concedes the FAI has a lot of work to do if it is to regain the confidence and trust of Sports Ireland and the wider republic.

The 21-page statement has also defended the role of Mr Delaney. Mr Conway has also argued his appointment to the new role of executive vice president, charged with dealign with UEFA and with FIFA, was a positive development.

“In the view of the board this will be to the benefit of Irish football,” he states.

The FAI has also included the report from consultants into governance at the organisation which recommended the establishment of the role now filled by Mr Delaney.

The association has been roundly criticised for its response to the controversy, and what was seen as a dearth of information it shared during correspondence on the issue, not least with Sport Ireland and with the all-party Oireachas committee.

Mr Conway has addressed this in the submission by saying that “no disrespect was intended to the Committee or Sport Ireland by the Football Association of Ireland’s letter of last week.

“…I know we have much work to do to rebuild trust and confidence in the Association and we are committed to achieving this as a Board.”

The FAI president said it the association’s board had also noted and acknowledged the concerns expressed by Sport Ireland and by Committee members last week. Under repeated questioning, the chief executive of Sport Ireland John Treacy would not state that he had confidence in Mr Delaney.

He said the board had met with Sports Ireland since that committee meeting last week. “We have emphasised to them that we are moving as fast as we can, being mindful of the complexity of the issues involved, including legal issues and the need to ensure that all statements we make are accurate and our internal and external processes are fair and robust.

“No disrespect was intended by the lateness of the letter of the 2nd of April to Sport Ireland or its brief contents. I apologise for this and accept more information would have assisted Sport Ireland.”

He confirmed the The FAI was also engaging with the Office of the Director of Corporate Enforcement in dealing with its inquiries.

Mr Conway has accepted that the circumstances that arose in April 2017 were not reported to Sport Ireland and, therefore, the association was not compliant with a clause required to draw down funding.

However, he has also pointed out that for each €1 invested through Sport Ireland funding, the Association matches this with an additional €4. He has said this had been acknowledged by Sport Ireland.

Outlining the complicated nature of finances in sport, Mr Conway has stated: “Sport is a very different business to others. The qualification stage process of football is unique. Financial fluctuations are the norm and cashflow is often irregular.

The disappointment of the failure of the men’s senior team to qualify for World Cup 2018 had a major impact on match attendance and, subsequently, cashflow.”

It is not known as yet if the FAI will refer to this impact on cashflow in the context of the loan received from Mr Delaney, when its officials appear before the all-party committee on Wednesday.

Mr Delaney previously said the €100,000 payment he made to the organisation was “in the best interests of the association at a time when immediate funding was needed”.

He said the payment in April 2017, which he had previously said was a short-term bridging loan, “had no impact on the full financial position or performance of the association for the year. It was a matter of timing.

Kelly and Lynch ready for Thurles showdown as if it’s their last 20:50
Wijnaldum attacks ‘stupid’ Pickford tackle on van Dijk 20:10
Golf clubs waiting to hear if they can stay open under Level 5 18:55
Donegal preparing for marathon solo journeys to Tralee 18:47
Dan Martin stakes podium claim on opening stage of Vuelta 18:24

1 Golf clubs waiting to hear if they can stay open under Level 5
2 Wijnaldum attacks ‘stupid’ Pickford tackle on van Dijk
3 Donegal preparing for marathon solo journeys to Tralee
4 Gerry Thornley: After 32 weeks the Six Nations is back up for grabs
5 Dan Martin stakes podium claim on opening stage of Vuelta
Real news has value SUBSCRIBE
Crossword Get access to over 6,000 interactive crosswords