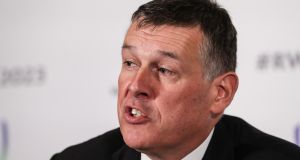 IRFU chief executive Philip Browne: he queried whether Rugby World Cup Ltd examined reasons for the Commonwealth Games being take out of Durban in a “substantive manner”. Photograph: Billy Stickland/Inpho

The Irish Times has learned that French federation president Bernard Laporte breached World Rugby’s code of conduct, signed by bidding nations and WR Council members, when claiming World Rugby lied to him about the independence of the report and for accusing the governing body of “negligence” and “amateurism”.

While this is grounds for disqualification ahead of a November 15th council vote by secret ballot, such steps are not expected from the governing body.

The IRFU is seeking to avoid a similar situation despite levelling multiple objections to the South African bid in a letter to WR chief executive Brett Gosper, leaked to the media on Tuesday.

IRFU chief executive Philip Browne stated the union was “fully aware of the terms of the code of conduct applying to the RWC 2023 host selection process...we have adhered at all times to the process in a supportive manner and will continue to do so”.

However, Browne continued to question perceived failings in the evaluation of South Africa’s bid.

“What specific consideration was given as to how South Africa will achieve full stadia, particularly across the pool stage matches involving lower seeded teams?” asked Browne.

World Rugby is satisfied that, like England 2015, 50 per cent of attendees at smaller matches will not be regular rugby supporters. It accepted the South African ticket programme, a primary means for unions to turn a profit from World Cups, will not bankrupt SA Rugby (a €180 million government guarantee is already in place).

The South Africa “ticket bank” scheme will sell cheap seats, starting from €3, with corporate bundles including tickets for smaller matches. These tickets will be funnelled into the ticket bank and distributed for free among local communities. It cost €50 for the most expensive seat in Cape Town when New Zealand played the Springboks on October 7th.

World Rugby accepts this plan as workable, along with the target of 91 per cent capacity for the entire tournament.

Browne went on to question whether an “independently recognised, world-class security organisation” was used, as was the case for deciding who would host the 2015 and 2019 tournaments, “and if not, why not?”

WR is adamant, but refuses to go on the record, that expert evaluation was employed. The Irish Times was directed towards the Dow Jones Sports Intelligence company with its stated goal of delivering “key insights to help assess third-parties, manage risk and perform due diligence across the whole range of sports industry relationships”.

The IRFU continues to question why Ireland received the same score on security despite current French concerns over terrorism and South Africa’s alarming crime rates.

The SA Rugby response on crime is to point to the lack of serious incidents for travelling supporters when the country hosted the soccer World Cup in 2010 and cricket World Cup.

Browne also queried whether Rugby World Cup Ltd examined reasons for the Commonwealth Games being take out of Durban in a “substantive manner”.

The reason, seemingly, why this was not a major issue in the WR report is Durban was the sole bid for 2022, but the South African government pulled support when the 4.6 billion rand budget  – over twice the guarantee for the rugby World Cup – climbed to 6 billion.

“For the RWC 2015 and 2019 bid evaluation process, World Rugby appointed an experienced external organisation [Barclays] to conduct an independent sovereign risk assessment related to guarantees, and each of the guarantors, provided by each bid. This appears reasonable as part of any risk-based evaluation, particularly given the importance of these financial guarantees to the funding of World Rugby and the global game.

“Query: Can RWCL confirm whether a similar rigorous assessment has been conducted for the 2023 process on each bid, and if so can you please share this assessment?”

At present there is no response from World Rugby or South Africa on the point of financial, commercial and commitments. This section was redacted from the report.

“We consider that the mechanical nature of the technical review undertaken by RWCL does not properly capture these clearly material issues which we raise, and as a result, in our opinion, Ireland’s scoring has suffered unreasonably, relative to the scoring for other bidders,” Browne added.

The Irish Times has also learned that South Africa assured World Rugby in writing it would pull out of the bidding process if not recommended by last week’s technical review report.

South Africa’s initial understanding was that this report, the validity of which has now been repeatedly queried by the Irish and French bids, would provide confirmation of the host nation for 2023, but the World Rugby Council retained its right for a final say with a secret vote on November 15th.