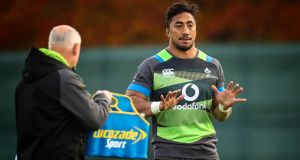 Bundee Aki is set to make his Ireland debut in the first Test against South Africa on Saturday. Photo: Billy Stickland/Inpho

The newly-qualified Bundee Aki is set to make his debut for Ireland against South Africa at the Aviva Stadium on Saturday in the Guinness Autumn Series opener. The 27-year-old, in his fourth season with Connacht, is in line to renew his Pro12 title-winning midfield partnership with Robbie Henshaw.

Henshaw is sure to shift to outside centre in the absence of Garry Ringrose and Jared Payne, having enjoyed a good run of form there for Leinster, while Aki has looked a rejuvenated player this season after being bedevilled by injuries last season.

A number of injury concerns appear to have upset Ireland’s plans and could yet affect the selection of the starting XV and replacements, which will be announced at lunchtime on Thursday. Joe Schmidt and the Irish coaching staff will be of a mind to pick what amounts to their strongest available team in a bid to hit the ground running for what appears to be the toughest of their three games.

Nonetheless, as Schmidt has maintained, this window provides an opportunity to expand the squad’s strength in depth. To that end, in addition to a debut for Aki, the in-form 21-year-old Ulster winger Jacob Stockdale is also in line for his home debut after starting two of last summer’s three Tests in the USA and Japan.

A member of the Irish Under-20 squad in last season’s Six Nations, Stockdale has scored five tries in seven games for Ulster this season, and is set to start in a back three featuring Rob Kearney and Keith Earls.

As well as the Lions’ halfback pairing of Conor Murray and Johnny Sexton, Ireland are expected to start with seven Lions’ forwards in the pack, although one of them looks like being Cian Healy, whose tour to Australia four years ago was cruelly cut short after one game.

Now back to something like his best, Healy is expected to pack down alongside Rory Best and Tadhg Furlong, with Devin Toner and Iain Henderson in the secondrow.

Amid something of an injury crisis in the backrow, with Jack Conan, Tommy O’Donnell and Dan Leavy all sidelined from training this week, presuming the three Lions of Peter O’Mahony, Sean O’Brien and CJ Stander are all fit, they should start, with another in-form player, Rhys Ruddock, certain to be involved in the 23 at the least.

Regardless of any further injuries, the bench could also contain some surprises, notably the choice of the in-form David Kilcoyne ahead of Jack McGrath, and Ulster’s Rob Herring over James Tracy. There is a close call between Kieran Marmion and Luke McGrath as back-up to Murray, while the four-times capped 22-year-old Joey Carbery is sure to be involved, as also might be the thrice capped Andrew Conway.