Steve Hansen sees opportunities for All Blacks after tough year 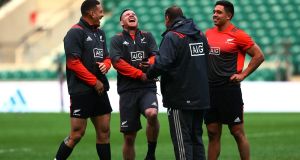 New Zealand head coach Steve Hansen shares a joke with with his players during the Captain’s Run at Twickenham Stadium ahead of the game against the Barbarians on Saturday. Photograph: Jordan Mansfield/Getty Images

Turns out we had it wrong all along. It’s not the cockroaches who will inherit the earth after the apocalypse, Steve Hansen will still be there too. At least, that is how the marketing team for Arnott’s Biscuits imagine it will go down.

Hansen is the unlikely star of their new ad campaign in a lavish little film directed by Zoë Bell. It’s about how (bear with me) a shortage of Tim Tams led to the breakdown of civilised society in New Zealand. As one of Arnott’s executives said: “Who wouldn’t want to make a movie with Steve Hansen about a biscuit apocalypse?”

Hansen plays the Mad Max style hero and has the deathless line “Never, ever, lose your biscuit”. Which, if it wasn’t one of his catchphrases before, certainly is now. Beauden Barrett and Ben Smith burst into a fit of giggles the last time they were asked about it in a press conference.

Hansen has always had a pretty good grip on his biscuit. He is about as unflappable a man as you could meet. You would not guess it from looking at or listening to him but this has been a bumpy year for the All Blacks, the roughest since he took over as the coach in 2012. Their record is P11, W8, L2, D1 and they still have to play France, Scotland and Wales this autumn.

They lost the second Test to the Lions, drew the third, and then lost again, away to Australia in the third match of the Bledisloe Cup. In between those results, they won the Rugby Championship at a canter, which would be just fine for almost any other side, but the All Blacks have been so good for so long you have to go back the best part of a decade, to 2009, to find the last time they had a worse record in a calendar year.

Hansen, of course, is not flustered. “The key thing this year,” he says, “is we’ve had a number of injuries, we’ve had suspensions and we’ve had some personal tragedies.” He thinks that when the World Cup comes around, the All Blacks will be stronger for it. “At the beginning of next year when everyone is available we should have a bigger pool to pick from, more competitive people, more experienced people, which should give us a boost.”

Hansen already has the rump of his XV for the World Cup, with a pack built around Dane Coles, Joe Moody, Brodie Retallick, Sam Whitelock, Kieran Read and Sam Cane, and Aaron Smith and Barrett at halfback.

But the last year has been a reminder even the best-laid plans can go awry. Retallick has endured a death in the family, Coles and Barrett have been suffering with concussion, Moody has injured his shoulder and Smith has had disciplinary issues. So right now, Hansen’s busy doing a little contingency planning. All those enforced changes mean the All Blacks have already used more players this year than they did in the whole of 2016, when they won 13 games out of 14. Hansen says they have “exposed a wider base than we probably originally thought we would do this year”. By the end of this tour that base will have grown wider still.

There are 3,000,001 reasons why the All Blacks are playing the Barbarians at Twickenham on Saturday but Hansen’s only concerned with the odd one, the rest are the beancounters’ business. For Hansen, eager, you guess, to wring some useful purpose from a match, it’s a good opportunity to build his squad’s strength in depth. He has rested a clutch of key players and picked three debutants and another six rookies in his 23.

It helps, too, that the Barbarians have obliged by picking 10 New Zealanders in their starting XV and three more on the bench. The Baa-Baas already have 147 All Blacks caps between them. Five of their squad are even going to join up with the All Blacks once the game is over.

In July there was a fanciful idea the Barbarians match could double up as an unofficial fourth Lions Test, a little like the famous game between the teams in 1973 that featured most of the Lions side who beat New Zealand in 1971.

Instead, for all the talk about the unique history of the Barbarians, the game has turned into something like an All Blacks trial match, possibles v probables. Which feels a sorry reflection of the Barbarians standing in the modern game. Still, they are expecting 65,000 fans to turn up. Hansen said that was a testament to the popularity of rugby in England but it seems to speak just as much to the strength of the All Blacks brand.

“It’s an opportunity for some of our inexperienced players to pull on the jersey without the pressure of Test rugby, so it’s important for the development of our players,” Hansen said. And at the same time, “we’ll look at both teams and make some assessments on players who are going to be playing against an international team of New Zealanders.”

He’ll be keen to see how Julian Savea, dropped from the squad after the Lions series, does against his former team-mates and how the Crusaders’ brilliant young flyhalf Richie Mo’unga cuts up against Barrett. Hansen will well remember the All Blacks were down to their fourth-choice flyhalf, Stephen Donald, when they won the World Cup in 2011.

It’s not only the new players Hansen is bedding in. There has been a significant change to the management team, too. Wayne Smith, who has been involved in the All Blacks set-up, on and off, since 1999, stepped down after the Rugby Championship. They have brought in Scott McLeod from the Highlanders to replace him as the assistant coach. But Smith’s contribution ran to an awful lot more than organising the team’s defence. He was a key figure in the team environment, the mind behind many of the ideas that shaped the All Blacks’ celebrated culture in the last decade.

McLeod played for the All Blacks, “so he has an idea of what it’s like”, but Hansen admits “it can be overwhelming for the management when they first come in, there is a lot of scrutiny and a lot of expectation.” McLeod has spoken about how Smith “has done a hell of a lot for this team’s performance, environment and culture” so is going to leave “a massive hole” behind him.

He shadowed Smith through the Rugby Championship. “It was a great exercise for him,” Hansen said. “Everybody knows who he is, he understands the old systems and he’s not looking to change everything overnight, he’s just quietly going about putting his blueprint on the game. He’s been good this week, nice and calm.”

Lesson No 1? Never, ever, lose your biscuit.