Leinster’s depth faces test as young side heads to Glasgow 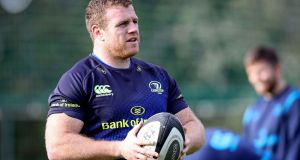 Leinster’s depth in their playing roster will receive a rigorous examination as head coach Leo Cullen has named a young side hoping to replicate their Champions Cup victory of a couple of weeks ago.

Wings Adam Byrne and Dave Kearney have been released from Ireland squad commitments and will start while prop Andrew Porter and Dan Leavy have also been cleared to play by Ireland coach Joe Schmidt, albeit that they start on the bench.

Westmeath-born Conor O’Brien, a former Ireland Under-20 international, is handed a debut in the centre alongside Rory O’Loughlin, while Jordan Larmour, who scored a brilliant individual try against Ulster last weekend when coming on as a replacement, will start at fullback. O’Brien, who plays his club rugby at Clontarf, deserves this opportunity that might have come a little earlier but for injury.

Sean Cronin, unlucky to be overlooked in terms of the national squad, will definitely be keen to prove a point and starts at hooker, while the Australian international Scott Fardy, who has started all his matches in the secondrow, is named at blindside flanker, a position he has played for the Wallabies.

There’s a surfeit of pace in the backrow with the promising Max Deegan, who scored a brace of tries in a recent British & Irish Cup match taking the number eight jersey and the backrow is completed by Irish international Jordi Murphy. The 22-year-old former St Michael’s schoolboy, Josh Murphy, is another set to make his debut if called from the bench.

New Zealander Callum Gibbins, who arrived from the Hurricanes in the summer will lead a side that sees 11 players involved in autumn international squads recalled. George Horne is rewarded for his man of the match performance against the Southern Kings, retaining the number nine shirt and will start alongside his brother Peter in a Glasgow jersey for the first time.

Glasgow Warriors head coach Dave Rennie said: “It’s been a different week, we’ve had 19 guys in camp with Scotland but we’ve just got on with things. Tactically things aren’t going to change from the last time we played Leinster, we just need to do things better.”

One of the admirable qualities Leinster have shown this season is the manner in which they have coped without a glut of first-choice players at times and still found a way to win; it will receive its sternest examination on Friday against the pool leaders and hosts.

Game management will be crucial and in that respect halfbacks Jamison Gibson Park and Ross Byrne will have seminal roles in coaxing the best from a backline that is short on experience in several positions. If Leinster can keep pace and width on the game then they have a chance but Glasgow will deservedly start as favourites.