Rugby statistics: People have the power in deciding how Bundee Aki is judged 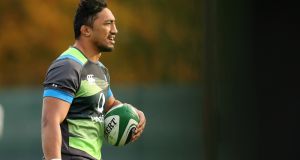 People of a certain vintage will remember John Sullivan’s sitcom Citizen Smith, – he also wrote Only Fools and Horses – where Robert Lindsay played the title character Walter Henry Smith (WH Smith anyone) or “Wolfie” as he was affectionately known. It was a brilliantly observed comedy about left-wing politics in Britain in 1977 that spawned the catchcry “power to the people”. Ignoring the pilot for the show, which was in April, the series is 40 years old this month.

It sprang to mind in something of a non sequitur in rugby terms because in trying to write a column on the breakdown of the 90 players capped by Ireland coach Joe Schmidt since taking over that role in November 2013, the area of classification, ascribing how players qualify to play for Ireland or the terminology to employ, proved tricky without breaking it down infinitesimally.

So the for purposes of the graphic below, the delineation is three distinct groupings: players that qualify through the three-year residency rule; players who qualify by ancestry, eligible through Irish-born parents or grandparents; and finally something of a catchall category, players who are born in Ireland, or like Jordi Murphy (aged nine) and Joey Carbery (11) and Niyi Adeolukun (11), who came to live and be educated in Ireland with Irish parents(s) or otherwise; they are referred to as citizens in the graphic.

In his four years as coach Schmidt has capped seven players who have qualified under the residency rule, Rodney Ah You (3 caps), Robbie Diack (2), Jared Payne (21), Quinn Roux (3), CJ Stander (15), Richardt Strauss (13) and Nathan White (13). That comes in at 8 per cent of the total number of players capped during that period.

The cumulative total of appearances can be broken down as follows: “citizens” (933 caps, 81 per cent), “residency” (70 caps, 7 per cent), “ancestry” (48 caps, 4 per cent). Those who have qualified under the residency rule represent a small percentage of the overall figure but their contribution is anything but modest, especially in the case of Payne and Stander – few would quibble with the positive impact they have made for their adopted country.

In the four-year period under scrutiny there were 10 players who qualified under “ancestry” – the number of caps in brackets refers to those won during the aforementioned timeframe as it does in the above “residency category” – Finlay Bealham (7), Michael Bent (2), Isaac Boss (5), Declan Fitzpatrick (2), Rob Herring (1), Kieran Marmion (16), Mike McCarthy (7), Sean Reidy (2), Dan Tuohy (4) and Kieran Treadwell (2).

Even though there are numerically fewer players (7) who qualify through residency they have won more caps than those who are eligible through ancestry (10); 22 in total, a figure that emphasises the value offered by a number of players in that category.

It also serves to dismiss the notion that the Ireland team has been flooded by what are termed “project players” after their three-year qualification period, one that goes up to five in 2020.

It’s interesting that Schmidt gave a debut to 45 of the 90 players during his four-year tenure, underlining his support for, and recognition of, form and potential to complement the experience and ability of established internationals; the breakdown of new caps is “citizens” (34 players, 76 per cent), “residency” (6, 13 per cent) and “ancestry” (5, 11 per cent). On Saturday for Ireland’s opening November test match against South Africa at the Aviva Stadium, Bundee Aki may become the 46th played to win a first cap under Schmidt. He has agreed to play for Ireland, he fulfils World Rugby’s eligibility criteria, he’s been enthusiastically embraced by his teammates in the national squad and he hasn’t selected himself but rather has been by a third party.

He’s raising the standard required to earn a place in the national side by dint of his ability.

Ireland as a nation claims to want to be an inclusive society rather than exclusive, so grading or measuring of “Irishness” for those self-appointed moral custodians who claim to be able to divine its essence is quantifiable only in the subjectivity of their argument; an opinion.

The power will be with the people at the Aviva Stadium on Saturday, and, as they did with Stander, Payne and others, the supporters may well recognise in Aki a player who has simply decided to play rugby for Ireland.