Connacht make it four straights wins as Cheetahs are tamed 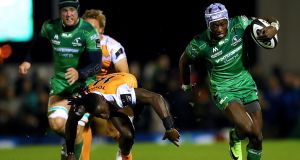 Connacht’s Niyi Adeolokun goes past Luther Obi of Toyota Cheetahs to score his side’s opening try during the Guinness Pro 14 game at the Sportsground in Galway. Photograph: James Crombie/Inpho

Kieran Keane’s midterm Connacht report reads “average, must do better.” And the former school teacher, who sets himself “high standards”, says Connacht needs to improve its grade if the club is to qualify for Champions Cup next season.

At the end of this first block of 10 games, Connacht has discovered some late form. The latest win over the Cheetahs was the third in the Pro14, and a fourth on the bounce in both Championship and Challenge Cup. But it has been a steep learning for both players and coach to change four-year habits from the Pat Lam era - as much “mental” as structural. Thus this break is timely for both.

Connacht’s latest win over the Cheetahs, first-time visitors to the Sportsground, was produced after an intelligent first half in which Connacht took control. While the visitors attacked with pace and intensity for long periods, Conancht’s defence stood up to the task, and some intelligent kicks in behind the defence helped put the pressure on the visitors.

Two tries in each half, from Niyi Adeolokun and Tom McCartney was enough to bag the four points and close the gap on the South African side. While the boots of Craig Ronaldson (8), Jack Carty (2) and Steve Crosbie (3) added a combined 13 points.

The first try epitomised quick hands and fancy footwork - Adeolokun in his first start of the season jinking outside and inside his opposition. The second was a well-worked series of patient attacks from a line-out. Adeolokun and Tiernan O’Halloran finding space up the wing, followed by a series of attacks, notably by the forwards, which was finished by the experienced McCartney for a 20-3 lead. However, that Connacht conceded two late tries in a scrappy second half, was sufficient for Keane to suggest his team were slipping back to old habits.

“To the victor goes the spoils, but they (Cheetahs) can feel a little bit hard done by. I thought if the game had gone any more minutes, they might have scored again. I thought we were starting to make massive defensive strides against Munster, but it’s a real head-scratcher why we reverted back to pretty average D from the previous week.

“Our tackling is not where it should be. We have a great defence coach who works tirelessly, and I really feel for him for the effort he has put in. It’s brought about a bit of change, but courage? You can’t coach courage and stuff like that, so it’s difficult for him.”

Connacht’s scrum remained a solid platform from which to score, while Eoghan Masterson and Eoin McKeon, another back row player now injured, having suffered a hamstring injury, continued to produce huge defensive efforts. O’Halloran received the man of the match award, while Adeolokun “the star of the show both in attack and defence “and flanker Naulia Dawai were welcome returnees to the squad.

Keane, who has the squad back in training this week despite the break, says there are elements to Connacht’s game that have improved - most notably an ambitious attack.

“We have created pretty good ambition which was really lacking in the first three or four weeks. Everyone was shovelling sh*t to be honest, and now they basically have an edge. I think they are enjoying the way we are playing, but it’s a 15 man thing. That has been up and down, we’ve made some progress, but our counterattack is a little tame and our kicking game has been a concern.

“I set high standards and I want the boys to do really well, and there are some non negotiables that need to be fixed - for example our exit strategies. We have worked tirelessly on that for 10 weeks and we are still struggling with it. We have to get that part of our game right. We will get found out if we don’t address those things.”

If the Pro14 ended after this opening block, Connacht, fourth in Conference A, would qualify for Champions Cup rugby - the Cheetahs, currently in third place, are not eligible next season.

“The last four games I am absolutely pleased for the club and also for the boys. They have got four wins, and we have a little more belief and a bit more bounce. But we still have a lot more do to be realistic about trying to qualify for things. We are going to have to lift our game quite a good bit more to be fair.”