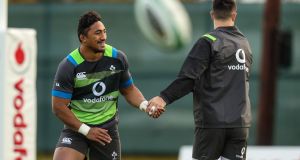 Bundee Aki and Conor Murray during Ireland training ahead of the November Series opener against South Africa. Photo: Billy Stickland/Inpho

Conor Murray has sprung to the defence of Bundee Aki and called some of the coverage and comments on the residency-qualified Irish player as “unfair.”

But the Ireland and Lions scrumhalf stopped short of condemning the criticism of the decision to allow Aki play with Ireland and the remarks made about him as racist.

Speaking at the Irish team base in Maynooth, Murray said that the Connacht centre, born in New Zealand to Samoan parents, had done nothing to deserve some of the abuse directed at him over that last week.

“He came over here and has played rugby and qualified for Ireland in the right way,” said Murray.

“I know people have different opinions on that [qualification process] but if you’re just looking at calling a player and singling a player out like that, and giving someone abuse or a hard time about it, I think it’s really unfair. It’s tough on a player like that. Bundee hasn’t done anything wrong.

“We’re lucky to have him in our squad. It’s definitely unfair for someone to receive that heat off the media when he hasn’t done anything wrong.”

Former international player Neil Francis said on RTÉ’s Claire Byrne Live that the decision to include the 27-year-old was morally wrong.

Aki had previously said in an interview that, while he has enjoyed the culture and the environment he is in at Connacht, to say that he is Irish is wrong because he wasn’t born here.

Francis said that attitude took away from players that were born in Ireland.

“That is fundamentally wrong. That is ethically and morally wrong in terms of representing your country. Handing out jerseys to people who say that is fundamentally wrong,” said Francis before repeating what Aki had said at the beginning of last season: “It’s wrong for me to take away from the guys who were born here and who want to play for the Irish and are Irish,” Aki said at the time. “I’m just here. My ambition is to play international. I like taking in the culture as an Irish person, but it’s wrong for me to say I’m Irish.”

Assistant coach Simon Easterby was not born in Ireland and played with Leeds Carnegie, Llanelli and Scarlets but never the Irish provinces. His mother was Irish and he earned 65 caps with Ireland. Ronan O’Gara was born in California and Jordi Murphy in Barcelona.

Exactly what constitutes being Irish may belong with the Jesuits. But Aki’s fealty and his sense of duty to the causes of the Irish team and Connacht rugby has never fallen short of impressing Irish management.

“The rules are the rules and Bundee has invested time into moving to Connacht,” said Harrogate-born Easterby. “There is always the question over the eligibility of players whether it is residency or grand parentage, players who aren’t born in the country.

“And that will continue. Bundee and other players have certainly been singled out by the media but he has fitted in really well. We’re very happy with what he has already shown.”

Murray added that it was highly unlikely Aki was oblivious to the tone and personal nature of the commentary. However he expects that it will continue if the abrasive player is picked by Schmidt for his first cap this weekend against South Africa.

“For me, I’m sure he’s seen it as we see most things, whether it be on your phone or someone telling you,” explained Murray.

“You’re going to see it. From what I see, he’s handling it really well and just enjoying rugby. If he does get to play at the weekend, it’s a massive occasion and a massive opportunity for him, and then to have that sort of heat on him again is probably frustrating for him.

“He’s looking to get the opportunities and hopefully he’ll get one, show people how good he is. And quieten people. He’s a strong player, a competitive person and I’m sure he’ll just take it on his shoulders and move forward with it.”

Did some comments have undertones of racisim, Murray was asked.

“No. I think it’s just an issue with some people having an opinion like that,” he said.

Schmidt has already begun to manage injuries picked up by players this week, although none of them are said to be serious with Leinster number 8 Jack Conan and flanker’s Tommy O’Donnell and Dan Leavy all being monitored.

O’Donnell was due to have a scan on Tuesday after hurting his shoulder in camp. The Munster backrow picked up the problem after a collision on Monday during an Irish training session, while Leavy, who has recently returned from injury, had some tightness in his hamstring. Conan sat out training due to a heavy workload.