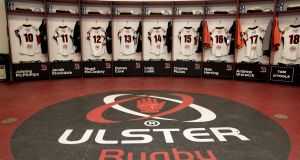 News journalists will be precluded from attending Ulster Rugby’s weekly press conference at the Kingspan stadium on Tuesday afternoon at which a coach and players will preview next weekend’s Guinness Pro14 match between Munster and Ulster at Thomond Park, a stance communicated via an official press release.

The statement issued to a number of newspaper and broadcast media outlets who were seeking access for news reporters to the press conference read;

“Ulster Rugby is contractually obliged by tournament organisers to deliver a match-week press conference that provides sports journalists with an opportunity to interview a coach and players regarding that week’s fixture.

“As previously stated, the conduct of news journalists at a recent press conference negatively impacted our ability to deliver a meaningful event that focused on rugby content. All media outlets are welcome to send staff who would regularly cover our press conferences and matches, as they have done in the past.

“News journalists interviewed Ulster Rugby’s Chief Executive following the outcome of the post-trial review, in order to allow the coaches and players to focus on on-pitch matters.”

Ulster were unhappy with the tone and line of questioning taken by a number of news reporters relating to the court case involving Paddy Jackson and Stuart Olding, across a variety of topics at a press conference on the Easter Monday.

There were a number of rugby reporters present, a small number of whom actively expressed their concern to Ulster rugby officials that a rugby press conference was essentially being hijacked and that their ability to do their work was compromised.

As The Irish Times reported last week, following the intense media interest in the wake of the trial involving Ulster rugby players Paddy Jackson and Stuart Olding, Ulster Rugby sent a statement to the Press Association (PA) claiming a decision to ban entry to some members of the press was taken because questions regarding Jackson and Olding negatively impacted the work of regular journalists.

That Ulster Rugby statement read: “The attendance of non-sport journalists at recent match week media events has caused significant disruption to regular attendees, who have been negatively impacted to the extent that they have been unable to access sufficient information and content for the days leading up to that week’s game,” said the Ulster Rugby statement.

This assertion has been disputed by a number of the rugby journalists - there are 11 - who claim that they were not personally consulted or that it reflects the majority opinion. The Irish Times understands that what the rugby journalists sought was not the exclusion of news reporters but that Ulster Rugby would have someone present at a press conference who could deal with matters pertaining to the Trial issues and that then, the coaches and players present would be able to address rugby matters.

The rugby journalists, through a series of conference calls and group emails, wanted Ulster Rugby to clarify the position of the rugby writers, confirming that they had not sought the exclusion of any of their colleagues. That was done last Friday afternoon after the Irish Times broke the story. Ulster Rugby explained that there had been "no official consultation" with the group of rugby writers.

However at last Tuesday’s press conference, one that news reporters weren’t allowed to attend, Rob Herring read out a short statement from the Ulster squad expressing their “sadness” at the departure of their former team-mates. This came a day after Ulster Rugby Chief Executive Shane Logan made himself available to the BBC, UTV and PA and some sports journalists at a couple of newspapers, who were given short notification that he would be available over the phone.

1 Pete Sampras: The forgotten great with the best serve in the business
2 Tipping Point: DeChambeau’s transformation raises questions, but who will ask them?
3 Super Rugby AU offers glimpse of rugby’s future if law changes are adopted
4 Cam Newton broke the mould: Can his flame be rekindled at the Patriots?
5 Mental clarity in chaos: Novak Djokovic, the man who turned two into three
Real news has value SUBSCRIBE