Leinster and Racing dominate European Player of the Year shortlist 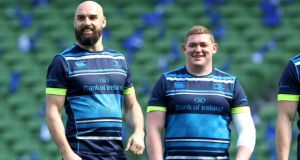 Leinster players Scott Fardy and Tadhg Furlong are on the shortlist for European Player of the Year. Photograph: Bryan Keane/Inpho

Champions Cup finalists Leinster and Racing 92 have dominated the shortlist for the EPCR European Player of the Year 2018 award.

Scott Fardy is one of three Leinster representatives in the running after his man of the match performance against the Scarlets at the Aviva Stadium on Saturday.

The Australia international is joined by Tadhg Furlong and Johnny Sexton, with the latter’s personal haul of 18 points in the semi-final taking him to 605 European Cup career points and sixth place on the all-time list.

The 15 nominees have been trimmed to five based on the combined verdict of a panel of rugby experts and the public vote. After impressive displays in Racing 92’s quarter-final and semi-final victories, Maxime Machenaud and Leone Nakarawa are added to the shortlist.

Public voting is now open on epcrugby.com/epoty and will close following the Champions Cup final at the San Mamés Stadium on May 12th. The winner will receive the Anthony Foley Memorial Trophy.