UL Bohs the cream of the crop again 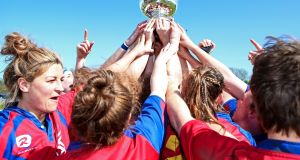 UL Bohemians captain Fiona Hayes lifted the Women’s All-Ireland League trophy for a second year in a row after the table toppers overcame Old Belvedere 15-0 in this afternoon’s sun-kissed final in Portlaoise.

Today’s repeat of the last two deciders saw UL Bohs come out on top in head coach Sean Fitzpatrick’s first season at the helm. Backboned by a cohort of current and former Ireland internationals, the Red Robins’ powerful scrum forced a first half penalty try and Niamh Briggs’ pinpoint cross-field kick set up winger Laura Sheehan for the clinching score, 17 minutes from time.

It was a richly-deserved triumph as UL had won all bar one of their 14 regular season games, claiming 12 try-scoring bonus points in the process. Old Belvedere, who were three in-a-row champions up to 2015, lost last year’s final by seven points but were the only side to beat Bohs this term, winning 19-0 at home in January.

There was hardly a bigger smile than that etched across the face of UL loosehead and skipper Hayes. Having just captained the Limerick club to back-to-back All-Ireland League titles, and a record 13th crown since 2001, the 35-year-old has not ruled out doing it a third time next year.

“Three in a row - I was think of retiring, but now the three in-a-row looks inviting, and sure I could go peacefully after that,” she quipped. “Absolutely over the moon. It was a very tough game and it took us a while to get going but but once we got up and running, well . . . we blamed the old turkey dinner for that (loss to Old Belvedere in January), it was straight after Christmas, but it was something we had spoken about and we were very focused today. There’s no point in running away with the league on points if you don’t finish it off in the final.”

The winners had dominated up front, something that particularly pleased former international Hayes. “We are proud in the pack, we pride ourselves on our set piece, and having a penalty try from a scrum, especially being a prop, well that was very satisfying,” she added.

This much-anticipated rematch did not really live up to expectations with both sides guilty of numerous handling errors. Along with a stiff breeze, it meant that a lot of play was confined to the clubhouse end of the pitch and scores were hard to come by.

UL were happy to go in at the break with a 10-point cushion. They may have dominated long spells of the first half but some costly turnovers denied them scoring opportunities. On the other side of the coin, Old Belvedere look dangerous on the counter attack - including a snappy break from Nora Stapleton - but all too often poor handling let them down when they looked to have created some hard-earned space.

UL should have taken the lead midway through the half when the power of their pack told once again. Having gone through the phases inside the Old Belvedere 22, they moved the ball left only for winger Laura O’Mahony to knock on with the line at her mercy.

However, just minutes later, they took the lead after a series of five-metre scrums when referee Daithi Flood’s patience ran out and he awarded the penalty try. Bohs’ experienced front row of Hayes, Gillian Bourke and Fiona Reidy - the trio from Munster’s Interprovincial title-winning campaign - did the damage.

With 37 minutes on the clock, Bohs outhalf Briggs split the posts with a right-sided penalty from 35 metres out, after Old Belvedere had been penalised for not releasing. To their credit, Josh Brown’s ‘Belvo charges came out all guns blazing on the restart, but just as in the first half, sloppy play cost them.

Much of the play was cramped in the middle third of the pitch with neither side able to break through, although Belvedere winger Gemma Matthews earned plaudits for a try-saving intervention out wide. Half-backs Nicole Cronin and Briggs soon combined to set Aine Staunton free close to the halfway line. The full-back went on a mazy run only to be stopped inches short by Old Belvedere scrum half Kathryn Dane.

From the ensuing scrum, UL worked the phases, kept their patience and, when the opportunity arose, Briggs expertly delivered her cross-field kick into winger Sheehan’s welcoming arms for a comfortable touchdown. Despite their best efforts, ‘Belvo were unable to respond in the closing stages.