There is reliable brilliance and there is Isa Nacewa 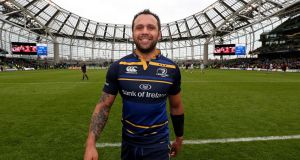 Leinster’s Isa Nacewa will retire at the end of the season. Photograph: Dan Sheridan/Inpho

The mind’s eye conjures up many Isa Nacewa moments but what he achieved deep down in Montpellier last season was astounding to witness.

The sheer will of the man excavated a bonus point from a drubbing in southern France. Taking the kicking tee off Johnny Sexton was brave, slotting three penalties, but sliding over for the last minute try, that still needed converting for Leo Cullen’s team to escape Altrad stadium in good health, displayed the rarest type of composure.

Change the date, venue, opposition and everyone has a Nacewa story.

“Where Isa has really excelled is his professionalism,” said Leinster chief executive Mick Dawson. “Take a dark night at the Dragons or up in Glasgow when the superstars are away and there he is playing like it’s the Champions Cup final.

“The younger lads see that.”

Nobody missed the sunny RDS against Castres in 2016 when Luke McGrath was sin-binned and Nacewa ran in a try that any scrumhalf would covet.

Then there was the time he ripped Munster apart in Croke Park from fullback. And who could forget his majestic winger’s try against Leicester.

Pick any and all those wintry nights on the road surrounded by Academy kids who must have wondered aloud about their captain being member of the one cap club.

“I don’t think Isa ever would have come here had he been able to play for the All Blacks,” Dawson admitted, “but his mistake of taking the pitch against Scotland was ultimately fantastic for Leinster rugby.”

It’s 2003 and a 21 year old Aucklander peers over the ditch as rugby greatest players gather in Australia. Nacewa remains a Kiwi boy to his fingertips but, as the well worn story goes, his Fijian father led to a late call to join the World Cup party.

Christian Cullen had vacated New Zealand’s fullback throne (joining Munster), Carlos Spencer was just about keeping Dan Carter at bay, while Fijian cousins Joe Rokocoko and Sitiveni Sivivatu were vying with Doug Howlett for wing berths. Nacewa was a peer to these All Blacks, showing the rare ability to play each and every position to international standard. Ok, maybe not outhalf - the very slot Leinster signed him as cover for Felipe Contepomi (A young Johnny Sexton must have loved that).

“We knew he was a Fijian international and the NZRU had taken a court case against World Rugby because all Isa ever wanted to do was play for the All Blacks,” said Dawson.

Amateur rugby rules, made to be broken, were cemented by professionalism so Nacewa was deemed a fully fledged Fijian international and there was nothing any lawyer could do about it.

By 2008 that process had been exhausted, making the move north inevitable as he was blocking the pathway of future All Blacks.

Leinster had their own problems. After the previous season’s European campaign stalled in the Pool stages, Michael Cheika signed three foreigners to alter the mindset of a group that evidently lacked the stomach for these semi-final days.

“A very good day’s work,” Dawson recalled of securing Rocky Elsom, CJ van der Linde and Nacewa. “We signed Isa because he was a very good rugby player who would be available for the entire season.”

In just his third match, against the Ospreys, he suffered a badly fractured forearm (not before clipping two drop goals).

He is almost like a player coach. He lives the Leinster standards every day

“Remember he tried to play on? His hand was flopping around and he was still trying to make tackles.”

So many kamikaze hits followed. Come the 2009 final at Murrayfield, Cheika benched Rob Kearney - on the cusp of becoming the Lions fullback in South Africa - as Nacewa had become essential to the cause.

Joe Schmidt knew him before anyone else. Leinster reunited them. “He is the Mr Rugby in my mind,” said Nacewa in 2009. “He taught me most of the stuff that I know about a backline in the three years I was with him at the Auckland Blues.”

They worked well together and may do so again some day.

There is reliable brilliance and there is Isa Nacewa. Take the 2010/11 campaign. Seán O’Brien was named European player of the year yet both the Leinster and Irish players voted to honour Nacewa at season’s end.

Then, unexpectedly in 2013, with a year to run on his contract, the 30 year old retired, returning home to become the Blues mental skills coach under John Kirwan.

“He had three young kids [Mia, Ellie and Lucy] whose cousins, aunts, uncles, grandparents were at home and [Isa and Simone] made family decision about where they wanted to bring them up,” Dawson explained.

“We were terribly disappointed but it was all done very amicably. He had fulfilled his end of the bargain, way beyond our expectations.”

Two seasons passed (the Matty O’Connor era) and the Nacewas missed Dublin, Isa missed playing. A call to a friend was all it took. “He phoned Shane Jennings to ask what the story was in Leinster. Shane spoke to the coaching staff and we were all keen to get him back.”

When Kevin McLaughlin was forced to retire, Cullen made Nacewa the club captain.

“Growing up and watching Isa play he’s been phenomenal in his time in a blue shirt,” said Dan Leavy. “He is almost like a player coach. He lives the Leinster standards every day and when he’s on the field he plays with real passion and aggression, which is infectious and also drives the younger players.”

Nacewa turns 36 in July and while he remains as important as ever, filling the inside centre slot while Robbie Henshaw recovered from surgery, ageing limbs made retirement inevitable.

Professional rugby clubs must be queuing up to put his rugby brain to good use but, as it stands, he will return to Auckland with his family. Perhaps with a fifth European medal.