Keith Earls: ‘If there was more time, we’d have caught them’ 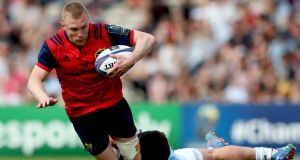 Munster’s Keith Earls is tackled by Racing 92’s Henry Chavancy in Bordeaux. “We knew they could get tired in the last 20 or30 minutes.” Photograph: James Crombie/Inpho

After a depressing weekend in Europe, Munster winger Keith Earls hopes the province can settle down and keep coach Johann van Graan long enough to instil some consistency in team performance.

Earls, who has been with Munster for his entire career, began with Declan Kidney in charge back in 2007. Since then he has had six different coaches.

The 30-year-old made his Munster debut in April 2007 against Welsh side Ospreys when Kidney was coach. Since then Tony McGahan, Rob Penny the late Anthony Foley and South African Rassie Erasmus have had spells at the top, with van Graan taking over mid-season.

“I think since I have become a professional rugby player I haven’t had a coach longer than two years,” says Earls. “Look, there is all the excuses in the world [why Munster lost] and it is down to the players as well, but get consistency now with Johann.

“We’ve been through a lot. I don’t know do we think as players. I think we need to have a good look at ourselves, review everything and see how we can stop being bridesmaids.”

In the end the small margin of the final defeat has left a bitterly frustrating taste. Earls understands that Munster’s poor start, one he struggles to explain, ultimately killed them.

But, he believes, had they initiated their comeback earlier than the second half, they would have had enough in the locker to engineer one of the greatest comebacks of his career.

“The most frustrating thing is we knew that the first 20 minutes is when they score all their tries,” he says.

“Look, we were just beaten up physically as well. They overpowered us and got gainline. We didn’t get to slow down their ball. They got width and scored wide a few times.

“We obviously had a game plan. We knew they were a big side. We have played them many times before and we knew they could get tired in the last 20 or30 minutes.

“That was the plan, to tire them out. And I suppose you get a feel of the game as well. We were down seven points quite early so . . . To be beaten by only five points, if there was five or 10 minutes left in the game, I think we would have caught them.”

Donnacha Ryan, who Earls describes as “Munster mad”, spent an hour in the their changing room after the match before being called by the Racing bagman. Between lineouts and work ethic, Ryan may be the prize rough diamond in the Racing team.

“He’s a massive influence on Racing since he’s gone there,” says Earls. “From what I know they respect Munster and having a Munster man in their team . . . he’s been around a long time. I think he’s driving their work rate. He was there in 2008 when Munster won in Europe. I think he’s taken that further step.”

But that’s cold comfort around Thomond Park this week.