Dylan Hartley ruled out of England’s tour to South Africa 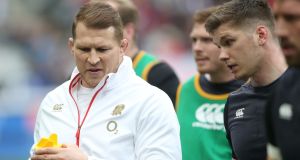 Dylan Hartley will miss England’s three-Test tour to South Africa in June after being told to take the summer off following the Northampton hooker’s latest concussion.

The 32-year-old England captain has not played since taking a blow to the head in their final Six Nations match against Ireland at Twickenham. He ended the 2016 championship in the same manner, knocked out during the grand slam win against France, in Paris and made only one more appearance for the Saints that season, as a second-half replacement in their final Premiership match at Gloucester.

Hartley led England in Australia that summer but he admitted before the pre-tour friendly against Wales that, having missed 14 weeks of that campaign because of concussions, he was concerned that another would make him question whether he should end his career. The World Cup had finished seven months before then but little more than a year before England go into camp for the 2019 tournament in Japan he is focusing on next season.

“It has been recommended by specialists that I take a break this summer and, while I find that decision hard to accept, it’s important I listen to that advice,” Hartley said. “I intend to use this time to recover fully from my injury so I can be ready to hit the ground running when pre-season training starts later this summer. I am very disappointed that I will not be available for Saints’ remaining Premiership matches as well as the England tour to South Africa.”

Hartley’s absence leaves the England head coach, Eddie Jones, contemplating an alternative captain for the third time since he took charge at the end of 2015. Hartley started the first 22 Tests under the Australian and, when he was made a replacement against Samoa last November, George Ford and Chris Robshaw were co-captains.

When Hartley missed the trip to France in the fourth round of the Six Nations, Owen Farrell stood in as captain but he is among the players Jones is considering resting for the South Africa tour having been part of the British & Irish Lions’ series-drawing squad in New Zealand last year.

Hartley’s decision to rest this summer comes in a month when a concussion expert has said the sport should limit contact training sessions during a season to reduce the risk of brain injury. The consultant neuropathologist Dr Willie Stewart described rates of concussion in the professional game as “unacceptably high” after the latest injury audit revealed the rate of concussion had risen for the seventh successive season.

“We are talking about diagnosable, recognisable brain injuries but there is more and more evidence that it is not just the ones that produce symptoms that are the problem,” Stewart told BBC Scotland. “It is the cumulative effect of the smaller ones as well that don’t necessarily produce symptoms.

“If instead of having several days of contact training during a week, with more and more impacts on top of each other, you do away with that, you are going to phenomenally reduce the number of impacts over the season. There is a lot of unnecessary exposure and what was suggested for England’s performances during the [RECENT]Six Nations? They played too much rugby.”

Another England international, the Leicester centre Manu Tuilagi, has not played much in the past four years because of a series of injuries. He returns for the Tigers on Friday night against fourth-placed Newcastle at Welford Road, in a match the home side need to win to remain on course for their usual berth in the play-offs. Tuilagi has been out for a month with an arm injury but is back in full training. “He is looking really sharp,” the Leicester director of rugby, Matt O’Connor, said. “He should be involved in some capacity in what is a massive game, winner takes all. All that matters is the result: there is no tomorrow if we fail to win.”