Richardt Strauss, Cathal Marsh and Peadar Timmins are also to depart at end of season 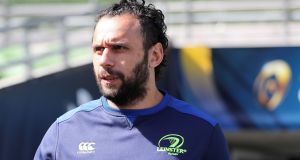 Isa Nacewa will return to New Zealand at the end of the season. Photograph: Bryan Keane/Inpho

Leinster head coach Leo Cullen has confirmed that his captain Isa Nacewa and hooker Richardt Strauss will be retiring at the end of the current season.

Nacewa has been capped 182 times for Leinster since his debut in September 2008. The 35 year-old has already won three Heineken Cup medals, a Challenge Cup medal and a Pro12 title.

Strauss made his debut in February 2010, and the 32 year-old has won two Heineken Cups, a Challenge Cup and two Pro12 titles in his time with Leinster. He has also represented Ireland on 17 occasions including three appearances at the 2015 Rugby World Cup.

Together with the recently retired Jamie Heaslip and the departing Jordi Murphy, six departing players will be acknowledged by the club at the end of season awards ball on Tuesday evening as Cullen also confirmed that Cathal Marsh and Peadar Timmins would be leaving the province at the end of the season.

Nacewa will not be remaining in Dublin, he will return to New Zealand at the end of the season. While Strauss is returning to South Africa after an injury ravaged past few seasons. Marsh and Timmins are looking for new clubs if they are to continue playing professional rugby.

“It is hard to articulate the impact that both Isa and Richardt have had on this club since their arrival,” explained Cullen.

“Warriors on the pitch and wonderful men off it, they are, in my opinion, two of the best players to have ever worn the blue jersey. Their impact on this group of players will be felt for years to come.

“We will also say goodbye this evening to Peadar and Cathal who have come through the Leinster pathway and are two great examples of that route and the success that can be had if you apply yourself in the right way. I wish them all the very best of luck in their future endeavours.”