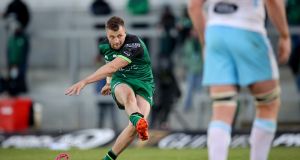 Connacht marked their return to the Galway Sportsground after seven months with a hard-earned victory over Glasgow Warriors in their opening Pro14 fixture.

In a game where the honours could have gone either way, Connacht will be relieved to have secured a first win after a run of six defeats to the Scottish outfit.

It was a game of swinging pendulums, but in the end Connacht outhalf Jack Carty’s 13 points added to the three tries – two from Bundee Aki and one from Quinn Roux, ensured Andy Friend’s side edged this contest.

Added to the doggedness of their pack, Connacht proved their prowess out wide, where the new-look back three found their speed in the second half to play a vital role.

They had little opportunity in the opening half when the visitors preferred to keep the game tight, and it was reflected on the scoreboard at half-time with Glasgow leading 3-7.

Carty’s perfect strike ensured Connacht grabbed an early 3-0 lead after just two minutes, and with the pack producing the perfect scrum, the home side continued to dominate the possession and territory through a series of penalties. However by the 10th minute they had nothing more to show for their efforts, Carty frustratingly missing another effort from the 22.

It signalled a change in Glasgow’s tempo as they started to make inroads into the Connacht territory and, with the penalty count reversing, they established a foothold as they continued to try to bully their way forward, utilsing Oli Kebble, Scott Cummings, Matt Fagerson and Ryan Wilson. They were presented with opportunity to open the scoring when Roux was yellow carded after 19 minutes for not rolling away at the breakdown, but outhalf Adam Hastings missed the kickable penalty from inside the 22.

However Glasgow did make the breakthrough before the half-time whistle when Hastings sent centre Nick Grigg through before adding the conversion.

They were first to add to their tally after the break, Hastings potting another penalty as the game continued to swing from end to end. Eventually Connacht made the much-needed breakthrough after 50 minutes. Peter O’Sullivan did well to track down the line, setting up field position before Tom Farrell broke the defensive line, releasing to Bundee Aki on his shoulder and the Ireland centre finished off.

Carty’s conversion levelled matters, and, with the momentum, Connacht’s passes started to stick – both wings exploiting space to set up field position before Roux finished under the posts,and Carty converted for a 17-10 lead.

In the nature of this see-sawing match, it did not last long as Glasgow struck immediately with a converted try through Hew Jones with Hastings adding the extras to level again. However Connacht saved the best for last. After a Carty penalty, John Porch showed electric speed to set up field position for Aki to bag his second. And, although Glasgow countered with a try from Tommy Seymour to come within a point, Carty, from the 10m line, slotted through the uprights. It proved just enough to secure an opening day victory.