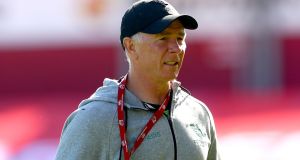 Connacht head coach Andy Friend: ‘We have the talent to improve, so it’s 100 per cent a mental thing.’ Photograph: James Crombie/Inpho

Connacht Rugby has set its seasonal goal as a top-two finish in its Guinness Pro14 Conference, which coach Andy Friend says will require a 90 per cent successful home record.

Ahead of the Pro14’s opening 2020/21 fixtures this weekend, Friend now wants more than European Cup qualification in his third season in charge, and, he says, it starts against Glasgow at the Galway Sportsground.

“We had a good chat about our goals and aspirations for the year, and to do that, you have to win 90 per cent of your home games, ideally 100 per cent, and you have to win more than 50 per cent of away games. The stats are pretty stark and paint the picture, and the players and staff are all aware of it.

“It starts this weekend. We want that 100 per cent record here – to make the Sportsground a fortress – and we will see how hungry we are on Saturday.”

That appetite was lacking in the final warm-up fixture against Munster A, he says, in a performance that was “nowhere near acceptable”, losing 40-12.

“We have the talent to improve, so it’s 100 per cent a mental thing. We talked to the players about being confident, clear and calm about their roles. Did we do that last week? No we didn’t, and we didn’t have that fight and that hunger which to me is synonymous with the Connacht jersey.”

While Ultan Dillane, who is undergoing HIA protocols, is the only doubt, Bundee Aki is once again expected to provide on-field leadership, and Friend is urging his players to display similar emotions.

“Bundee is by far is our biggest energy-giver. We are not asking anyone to be Bundee Aki, but what we will ask is for people to be more external with their emotions and thoughts. If someone has done well, let him know it, be comfortable racing up to someone and giving him a pat on the back. If someone is not giving something that they need, let him know. We have been working on that over the last couple of years, being a team that is connected on the field, informing each other.”

Now with the possible expansion of the Pro14, following the South African Rugby Union’s vote to move the Bulls, Sharks, Lions and Stormers into what would become a Pro16, Friend says it will add value to the competition.

“Those four teams are very well known around the world – the Kings and the Cheetahs are probably lesser-known teams – but when you have the other four, that would definitely lift the level of the competition.”