The Offload: Consistency in interpretation needed to protect players 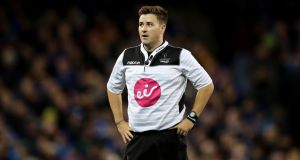 World Rugby’s commitment to player safety once again came sharply into focus during Edinburgh’s Pro14 victory over Leinster at Murrayfield.

Edinburgh secondrow Fraser McKenzie received a yellow card for his part in a “two-man” tackle in which Leinster centre Noel Reid was lifted past the horizontal and thrown to one side, landing on his shoulder/neck/head.

It’s a moot point trying to ascribe intent; it didn’t look malicious but certainly was reckless and dangerous. There was no care as the tackle law stipulates in bringing the player back down to the ground in a controlled manner.

Welsh referee Ben Whitehouse, after reviewing the incident and in consultation with TMO Neil Paterson, decided that Reid had been lifted above the horizontal and had landed on his shoulder. He then decreed that the punishment for the infringement should be a yellow card.

It’s not an outcome driven process but the fact that the Leinster centre having received treatment on the pitch, was subsequently removed, underwent a Head Injury Assessment (HIA), which he failed and as a result didn’t return confirmed that he had suffered in the incident. He must now follow the return to play protocols.

Quite how the officials saw this as a yellow and not a red card is disquieting in the context of all the talk from the sport’s governing body down, to making the game safer for all players. There has to be consistency in interpretation because mixed messages won’t have the desired effect in trying to eradicate incidents of this ilk or a similar nature from the game.

It doesn’t matter what if any disciplinary process ensues arising from the incident to some degree because the onus has to be on the match officials to consistently make the correct decisions in relation to player safety and if that leads to a couple of marginal calls then so be it, if the welfare of players is the priority.

By the numbers: 2 - Cards brandished in the same sequence of play during the match between Ulster and the Southern Kings. Tertius Kruger received a red for a tackle on Robert Baloucoune and Alandre van Rooyen a yellow for a swinging arm.

It’s important to recognise the role of clubs in facilitating the development of the players that helped Ireland win an Under-20 Six Nations Championship Grand Slam.

Scott Penny (Leinster) and Angus Kernohan (Ulster) have enjoyed game time this season with their senior provincial sides but for the remainder the staple rugby diet was senior All-Ireland League rugby, rather than the 20s age-grade at club level.

Quite apart from creating a nurturing and one presumes fun environment from which the players developed – this applies to junior and senior clubs, occasionally both involved in the playing pathway, and also the schools – from minis up, the quality of the club game in Ireland, particularly at Division 1A level, allowed the players access to high grade rugby.

In chatting to Irish loosehead prop Josh Wycherley (above) after the Welsh match, he pointed out that the All-Ireland League and his time spent with Young Munster coming up against older, more experienced props gave him confidence to deal with whatever he faced playing international age-grade rugby.

The same was true with tighthead prop Thomas Clarkson, who enjoyed game time with Dublin University this season. As an education process, it was an honours level syllabus.

Quote of the week: “We came out with a better attitude in the second half. I thought we got some rhythm and scored some really good tries”– Munster coach Johann van Graan after his watching his side come back from 12-0 down to beat Zebre.”

Another sojourn for Gatland?

In a week in which Ronan O’Gara and Fabien Galthie have been linked with roles in France’s coaching cadre ahead of the Rugby World Cup in Japan, there has been substantial speculation too with regard to a successor to the current head coach Jacques Brunel who is expected to step down after the tournament.

There now seems to be an acceptance in France that the way forward from the perspective of a new head coach will be to look outside the country for the first time .

French newspaper, L’Equipe confirmed that the kingmaker and President of the FFR, Bernard Laporte, has been given permission to look outside the country for the Tricolores. Gatland is also supposed to be on a wish-list in terms of the England and Australian rugby unions respectively.

The New Zealander is believed to retain an interest in resuming his role as Lions head coach for the 2021 tour to South Africa, having performed in that capacity in 2013 and 2017. He has stated that he would like to coach a New Zealand Super Rugby franchise with a view to one day coaching New Zealand.