Six Nations cannot be allowed to disappear behind a paywall 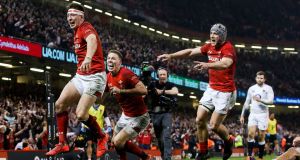 Late last week, back when Ireland still thought it might be a bright idea to irritate the Welsh by insisting they keep the roof open for that weekend’s game, Alun Wyn Jones was asked whether it was right that the opposition had any say in the decision. “I don’t know,” he said. “That’s for the alickadoos, isn’t it? I don’t wear a shirt and tie long enough to make those decisions.”

Alickadoo. What a gobstopper of a word. It’s one you can really roll your mouth around, with such a particular meaning that a lot of people reading probably hadn’t the foggiest what Jones meant.

It’s down in the Oxford English dictionary, where it’s defined as “a person who is attached to or associated with a rugby game or club but does not play, especially an administrative official or committee member,” but no one seems to agree exactly where it comes from. There are stories of course. One is about the time the old Irish full-back Ernie Crawford got annoyed with a teammate because he always had his nose in a book about a Sheikh and told him “you and your bloody Ali Khadu”. Another about an official who, asked to give more help, would only ever say, “it’s all I can do”. That’s how they tell it in the clubhouse, anyway. No one really knows.

Alickadoo is a little reminder, then, that there are things about rugby even those of us who love it, and like to think we understand it, are at a loss to explain, like exactly what the props are up to in the front row of the scrum. Stand back, see it from a stranger’s point of view, and it can seem an obscure and inaccessible sort of sport, which is something those same alickadoos would do well to keep in mind these next few weeks as they try and decide exactly what the future of the Six Nations will look like.

Right now the Six Nations are considering three competing investment offers; one from the CVC Capital, another from IMG, and the other organised by World Rugby in partnership with the marketing agency Infront. There are some big numbers being bandied around, almost irresistible, you’d think, when you’re as hungry for money as, say, the English RFU is right now. It had to lay off 10 per cent of its workforce last year.

But before they bite, they need to consider the cost of each offer as well as the price, because it seems likely that some of those sums only work if the Six Nations comes off free-to-air TV.

Like the bid from CVC, who acquired F1 in 2006 for £1.4bn. They were infamously accused of “raping the sport” by Bob Fernley, the former team principal of Force India. “All their actions have been taken to extract as much money from the sport as possible and put as little in as possible,” Fernley explained. Surprise, surprise, CVC took the sport away from free-to-view and sold the rights to Sky.

For a sport like rugby, that could be a fatal mistake. And if the RFU, and the other unions, needs an insight into just how important that kind of mainstream accessibility is, it would do well to arrange a visit to Lord’s, headquarters of the England and Wales Cricket Board. The ECB sold its rights to Sky in 2006, and made a lot of money doing it. It used that cash to invest in the domestic and international teams and build up a reserve that it has since blown through trying to find a way to undo all the damage they’ve done to their game. The ECB is tying themselves in knots trying to get cricket back on to mainstream TV, and has had to concoct an entirely new format of the sport, the Hundred, to attract the BBC.

According to the Broadcasters’ Audience Research Board (Barb), around 6.6m people in the UK watched the live coverage of Wales’ match against England in Cardiff. Sports administrators love to talk, now, about the changing media landscape (“I’m not looking at free-to-air, I’m looking at free-to-view, in the sense that more and more of our fans stream the games,” said the Six Nations chief executive, Ben Morel, recently) – well, according to Barb, 28,000 people watched the match on a laptop or PC, 18,000 on a tablet and 8,000 on a phone. And the rest, some 6,580,000, all watched it on BBC One, where it was the fourth most-viewed programme on that week.

Precise viewing figures for Sky’s coverage of the autumn internationals are hard to come by, but the RFU has said in the past that those matches typically attract “around a million” viewers. That sounds a generous estimate, but it roughly matches the gap in cricket’s figures. At its peak, the 2005 Ashes on Channel 4 attracted 8.4m viewers; a decade later, the 2015 Ashes on Sky got just under 500,000.

You need a balance – the money made from showing summer tours and autumn internationals on subscription TV is vital for the sport. But so is the access to the wider audience that you only get with free-to-air. Because the BBC and ITV coverage isn’t just about what happens in the 80 minutes of the match; they’re still the broadcasters that shape the national conversation. Without them, twilight might be a lot closer than the alickadoos think. - Guardian