Leavy and McGrath return for Leinster visit to Edinburgh 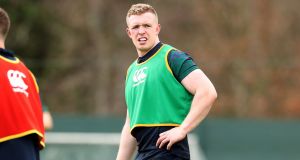 Leavy hasn’t played since December 22nd because of a calf injury but spent some of the latter part of his rehabilitation period in Ireland camp.

It’s November since Tomane (torn hamstring) and McCarthy (foot) last donned the Leinster colours while McGrath suffered knee ligament damage in the province’s Champions Cup win over Toulouse at the RDS in January.

Ciarán Frawley who has played most of his rugby at outhalf or inside centre is named at fullback. Up front Sean Cronin is named at hooker, Josh Murphy moves to the the second row from his normal position of blindside flanker, while Max Deegan reverts to number eight, alongside captain, Rhys Ruddock and Leavy.

Jack Dunne and Oisin Dowling at set to win their respective third caps off a bench that contains the in-form Conor O’Brien and international props Jack McGrath and Andrew Porter.

Edinburgh coach Richard Cockerill has named four of the side that were part of the Scotland team that drew 38-38 with England at Twickenham last weekend while resting a handful of others from that match. Centre Matt Scott returns after five months out with a head injury while former Scottish captain, John Barclay will make his debut in a side containing 10 internationals.

Leinster have already qualified for a home semi-final in the Pro14 so the outcome of the match is of little consequence materially but with players jostling for positions in the match-day 23 for the Champions Cup quarter-final against Ulster at the Aviva Stadium the following weekend, it should guarantee plenty of focus and determination.

If McGrath and McCarthy prove their fitness then Leinster head coach Leo Cullen is less constrained when it comes to selecting two from James Lowe, Jamison Gibson-Park and Scott Fardy for the game against Ulster.

Edinburgh host Munster in the Champions Cup on Saturday week, so it isn’t a surprise that Cockerill has fielded a little bit of a composite side, albeit less so than the visitors.

The home team needs to win this match to maintain a challenge in both competitions as they languish in fifth place, eight points behind Leinster’s closest pursuers in Conference B, Italian side, Benetton.

The visitors are slightly more makeshift in team orientation and that coupled with a number of players returning from injury gives Edinburgh a slight advantage on paper, while acknowledging that Leinster have carte blanche to go and play without fear.