Rugby stats: Ireland don’t need to try too hard to beat the French

Rugby statistics: Once a staple of Paris trips, touchdowns are now thin on the ground 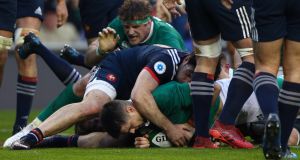 Ireland’s only try scorer in the last four matches against the French is scrumhalf Conor Murray (2017). Photograph: Ian Walton/Getty Images

Once upon a time Paris in the springtime used to send a shiver up the spine of Ireland rugby teams and supporters alike, an X-rated spectacle for the green-clad visitors, watching helplessly as the French, with a mixture of brutality and flair, ravaged the visitors, sending them home battered and bruised having shipped a deluge of points.

The band played, the crowd sang, le coq Gaulois roamed the touchline, and France generally scored tries by the bucket-load. Lansdowne Road wasn’t exactly a safe haven but the French style was more collars down than up in Dublin, finding it more difficult to locate the Irish try-line.

Ireland’s fortunes changed appreciably at the turn of the century and they have improved immeasurably under Joe Schmidt’s coaching patronage. In the six competitive matches since 2014, five Six Nations games and the World Cup clash at the Principality Stadium in 2015, Ireland have conceded just five tries to France and scored six in the process at 1.83 per game.

Considering that the 2014 Six Nations game between the countries contributed five of the 11 tries, Ireland scoring three (Johnny Sexton 2, Andrew Trimble) to France’s two (Brice Dulin, Dimitri Szarzewski) and the World Cup match (2015) a further two (Rob Kearney and Conor Murray) – the French didn’t cross the Irish line in that match – in total there have been only four in the last four matches.

Arguably the most relevant statistic during that sequence of matches is that Schmidt’s Ireland have won five of the six games, their only reverse, a 10-9 defeat in Paris (2016). Ireland don’t need to score tries to win these matches but there’s little doubt that they’d prefer to have more than one in the last 320 minutes of rugby against France.

French coach Jacques Brunel has retained the same team and replacements that beat Scotland for Sunday’s game against Ireland at the Aviva Stadium, a reward for their four-try, bonus-point win in Paris and the first time that he hasn’t changed the team in his 14-match sojourn in charge of the national side.

The French have scored seven tries in the tournament to date, three from kicks or kick-return, three from set piece, and one from a turnover. Their opening try of the tournament came from a Welsh handling error in a tackle on the halfway line, France swept down the touchline and once inside the visitors’ 22, props Jefferson Poirot and Uini Atonio crashed over the gain-line.

On the third occasion, France presented a similar shape to the defence, but this time went out the back, ignoring the pod of forwards and working the ball to number eight Louis Picamoles in space; he cut back against the grain carrying Welsh fullback Liam Williams over the line.

The second try in that match was when Damien Penaud found space where there ought to have been none, and several phases later Wales wing George North bit in on a tackle when he should have stayed out on the try scorer, Yoann Huget.

The French managed only one try in the shellacking at Twickenham, winning Morgan Parra’s box-kick re-gathered in the air and then Huget set off on a run in which he should have been tackled on a handful of occasions before providing Penaud with an unencumbered run down the touchline.

Brunel’s side crossed for four tries against the Scots, the first of which came from a long kick which fullback Thomas Ramos fielded inside his 22. Beating three tacklers, Penaud and scrumhalf Antoine Dupont carried on the counter-attack and from a ruck six metres from the Scottish line, Ramos fed Romain Ntamack who scored close to the posts.

The second came in an unlikely fashion, a chip and re-gather by Mathieu Bastareaud from a bouncing pass but the origin of the move was catching a re-start and electing to play out of their 22 from a maul through Demba Bamba, Penaud and Dupont.

The other two tries scored by replacement Gregory Alldritt came from five-metre scrums. In describing the tries, the same names crop up regularly, Huget and Penaud in particular have been catalysts in France’s try scoring exploits; the other lesson is that a poor kick-chase will be punished.

The weather on Sunday, rain and wind, suggests that the try-scoring ratio in the fixture may not improve much but Ireland won’t care unduly if they can maintain that winning habit.