Rugby stats: Squad changes and work done between now and September will be key 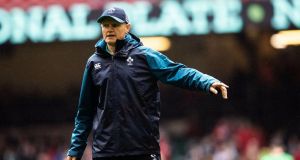 Joe Schmidt: Ireland’s head coach has plenty of time still to fine-tune his squad for the next World Cup. Photograph: Bryan Keane/Inpho

The keening in Ireland following the Six Nations Championship has already dropped a few decibel levels and should bottom out over the next few days as provincial interests in the Pro14, Champions Cup and Challenge Cup supersedes the national team as a focus of importance.

It’s roughly six months to the opening match of the 2019 Rugby World Cup in Japan and about 20 weeks until Ireland play the first of four warm-up matches ahead of the tournament.

The Six Nations finger pointing/blame game is now in time added on and in recent days has shifted appreciably in orientation, originally going from nought to umbrage, to the opposite end of the spectrum, the Corporal Jones catch-cry, “Don’t panic, don’t panic”, from the long-since-defunct television series Dad’s Army.

The middle ground is less populated and certainly less colourful in any debate. Ireland didn’t meet the standards in performance terms they set over the previous 18-months, collectively and individually in many cases, and that had a direct impact on the results, which were underwhelming and therefore disappointing, when weighed against pre-tournament prospects.

But which is the more likely scenario ahead of the Rugby World Cup in Japan? Several key players will rediscover form, Joe Schmidt and the coaching cadre will tweak Ireland’s patterns and the team will regain its playing mojo or that the national side is doomed, fated to crash and burn in Japan.

Both are possibilities, but at this point based on the body of work that the current squad – who were minus a few key injured players that will add value on their return – has offered when climbing to number two in the world, there are reasonable grounds for optimism in anticipating an upturn in fortune.

There is also one statistic in particular that’s worth bearing in mind and it arises from the 31-man squad Schmidt picked for the 2015 Rugby World Cup. Nine players, almost a third of the squad that travelled to the World Cup, did not play a single minute of the Six Nations of that year in which Ireland won four of five matches and finished first in the tournament.

Richardt Strauss, Tadhg Furlong, Nathan White, Donnacha Ryan, Chris Henry, Paddy Jackson, Darren Cave, Keith Earls and Dave Kearney were absent from the entire Six Nations for a variety of reasons but were given opportunities to stake a claim in World Cup warm-up games, from where they earned a plane ticket.

Strauss played in all four World Cup warm-up matches, Furlong in two, making his debut against Wales at the Aviva Stadium, while White played three matches in that sequence, winning a first cap against Scotland in August.

Racing 92’s Ryan holds the distinction of not having played a minute of the 2011 and 2015 Six Nations yet on merit went on to play in the two World Cups later that year. Henry’s previous cap was in 2014 but he lined out in three warm-up games, Jackson the same number (2014, Italy), Cave two matches (Georgia, 2014) and Earls played a brace too with his previous appearance in an Ireland jersey the defeat to Italy in Rome in March, 2013.

Dave Kearney was injured in Leinster’s final Champions Cup pool game against Wasps, missed the Six Nations, but returned to play in three warm-up matches for Ireland in the summer and then started against Canada, Italy, France and Argentina in the World Cup.

On the flip side, Ian Keatley, James Cronin and Robbie Diack all played in the 2015 Six Nations but didn’t make the World Cup squad as was the case with Marty Moore, Tommy O’Donnell and Felix Jones, the latter trio ruled out of consideration because of injury.

In 2011, eight players didn’t take part in that Six Nations tournament (Declan Kidney’s squad finished third with three wins from five matches), yet went on play in the global competition in New Zealand, proving 2015, is not a statistical aberration in terms of those coming through late to claim places in an Ireland squad for a World Cup.

So in those circumstances what relevance will Ireland’s results in the 2019 Six Nations have in predetermining Ireland’s fate in Japan?

The short answer is none based on the evidence of the last two World Cups. Learn lessons, sure but what’s more important is the work done between now and next September, injuries notwithstanding, to try and guarantee a more satisfactory outcome, rather than carrying any baggage forward.