Rory Best’s remarkable service all there in black and white

Rugby Statistics: Hooker has been a remarkably consistent figure in his 116 caps to date 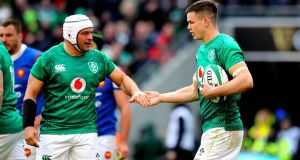 Rory Best: played in all 51 of Ireland’s matches in the Six Nations from February 4th, 2007 until the second game of the 2017 tournament. Photograph: Ryan Byrne/Inpho

Saturday’s game against Wales, the final match of the 2019 Six Nations Championship, is likely to be Rory Best’s swansong in terms of the tournament if the Ireland captain decides to retire as he has indicated after the Rugby World Cup in Japan later this year.

The 36-year-old hooker has made 116 appearances (95 starts) for Ireland, scoring 10 tries, the latest of which was against France at the Aviva Stadium last weekend. He made his Ireland debut on November 12th, 2005, replacing Shane Byrne during a 45-7 defeat to New Zealand.

It was something of a family affair that day as his brother, Simon, was also among the replacements a group that included another Best, Neil, no relation, who also won a first cap in the game against the All Blacks.

However on the weekend in question the column will largely focus on Rory Best’s appearances in the Six Nations, which rather appositely started against Wales, at Lansdowne Road in 2006. The match took place less than a fortnight after Mike Ruddock, who had led Wales to a Grand Slam the previous year, resigned as coach.

Australian Scott Johnson took over in a caretaker capacity for the remainder of the tournament, with the first of those games against Ireland. Best came on as a replacement for Jerry Flannery in Ireland’s 31-5 victory. He didn’t play another game for Ireland until the opening match of the 2007 Six Nations, coincidentally against Wales but this time at the Millennium Stadium.

Best was one of three Ireland try scorers – Brian O’Driscoll and Ronan O’Gara the others – in a 19-9 victory. After Saturday’s match he will have played against Wales (14), more often than any other country in the Six Nations, having lined out on 13 occasions apiece against England, Scotland and France and opposed Italy 11 times.

That particular match proved the starting point of a remarkable run in which he played in all 51 of Ireland’s matches in the Six Nations from February 4th, 2007 until the second game of the 2017 tournament when he missed the victory over Italy in Rome through injury. It’s a staggering achievement from a physical perspective but also in terms of the consistent quality of his performances.

He started 43 of those 51 games, twice a replacement in the 2008 tournament, while sitting on the bench behind Jerry Flannery in four of Ireland’s matches during the Grand Slam winning campaign of 2009; the only one he started was the victory over Scotland in Murrayfield.

His last two Irish matches in the Six Nations in which he wasn’t the starting hooker came in the 2010 tournament in the first two games against Italy and France and since then he’s played in 45 of Ireland’s 47 Six Nations games; the 2017 game against Italy and this season’s game in Rome when he was rested being the two exceptions.

In his 63 Six Nations matches since making his debut – 54 starts and nine as a replacement – he has scored five tries and in what all Irish supporters will hope is a portent of things to come he has been most prolific against Wales (2) with one apiece in matches against Scotland, Italy and France.

The only blemish is that he never crossed the English line in the competition, a statistic that now looks like remaining unaltered if he steps down after Japan.

Best will captain Ireland for the 32nd time in all matches at the Principality Stadium on Saturday and his record reads: 31 matches, 21 victories, nine defeats, one draw. In the history of Irish rugby those figures mark him – taking a minimum of five matches as captain to qualify – as the third most successful captain of the national side.

The 1948 Grand Slam-winning captain Karl Mullen leads the way on 73 per cent followed by Ernie Crawford (70 per cent), Best (68 per cent), Tom Kiernan (67 per cent), Brian O’Driscoll (63 per cent) and Paul O’Connell (62 per cent), whom Best succeeded as full-time Irish captain.

When factoring in his two Grand Slams, leading Ireland to a brace of victories over New Zealand and the various Six Nations-winning squads with which he has been involved, there is only one major omission from his rugby CV at Test level and hopefully he’ll have a crack at that one next autumn.

For now though, one last victory in Cardiff on Saturday would constitute a perfect Six Nations send-off.

1 Six Nations: Ireland are contenders but England still the team to beat
2 Mike Catt hopes to have Irish backs purring in Six Nations
3 Gary Neville in Qatar an exercise in semi-journalism
4 In Donegal Michael Murphy is seen, simply, as a godsend
5 The world spins but it’s soon back to Dublin and Kerry
Real news has value SUBSCRIBE