With no warm-up games and no crowds, it could take a while before teams get up to speed 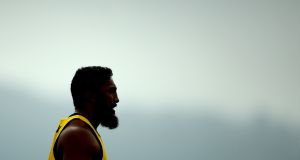 Connacht and Ireland centre Bundee Aki has bulked up ahead of the restart. Photograph: James Crombie/Inpho

The old interpros are relevant again. As Leinster and Munster serve up the first delicacy in what seems like forever, it is important to lower expectations. They cannot possibly reach the heights of Croke Park in 2009. Somewhere along the lines of Temple Hill in August 1999 would do fine.

Silver lining: enjoy the rare and beautiful sound of players roaring at each other. Don’t fret over the error count or lop-sided scoreboard. Should the old firm serve up a thriller, enjoy the unexpected sunshine. Ulster versus Connacht on Sunday could be worse. Or far better. Nobody knows what is going to happen anymore.

Be happy with whatever we are given because the standard is sure to rise week upon never ending week, with the first crescendo being Saracens visiting Dublin and Ulster journeying to Toulouse.

No problems are anticipated despite the European quarter-finals coming seven days after the Pro 14 decider. That brings us to September 20th and with four matches in the can – for teams reaching the league final – who knows how each provincial squad will be holding up.

Leo Cullen has a fair idea. He already anticipates decimated numbers similar to Leinster struggles after the 2015 World Cup, before manfully coping post the 2017 Lions tour. Last year they barely missed a beat.

The major concern is asking elite athletes in pre-season mode to flip a switch. One week after the Champions Cup final Italy arrives in Dublin for the rescheduled Six Nations.

There follows five full blown Test matches over six weekends as part of a concocted tournament that includes Japan and Fiji before diving straight into next season’s Champions Cup on December 11th.

Dylan Hartley, of all people, is overseeing player welfare. Not formally, of course – he’s flogging his autobiography – but nobody else is signalling the treacherous road ahead.

The former England captain writes about rugby being reshaped “subtlety but relentlessly” by “money men, geo politicians, talking heads and television executives”. This will become blatantly obvious in the new era of CVC and private equity investment.

When Brian O’Driscoll mentioned a culture of pill popping in December 2018 everyone quickly moved on after current coaches and players refused to break omerta. But Hartley shines a light on English club players still needing to “gobble painkillers like smarties”.

“As players become bigger and faster and stronger they will be chewed up and spat out quicker,” he adds. “Everyone told me when you retire your body feels great. I feel completely the opposite.”

At best, professional rugby does not let up until August 2022. Players will always prefer to be battle hardened rather than undercooked and the IRFU employee is monitored by the best sports scientists and athletic trainers money can buy. No expense is spared in this department for one overriding reason; the Irish rugby man needs an edge. He must be fitter because he’ll never be faster or bigger. That’s also why RG Snyman walks among the Lilliputians of Limerick.

Irish rugby has to be smarter, especially when it comes to recruitment, with David Nucifora splashing out on all the Englishmen cut loose by the RFU.

Nucifora would never be brazen enough to attempt the dangerous situation currently playing out in the Gallagher Premiership. England’s lax player welfare plan, to clear the backlog and bank all that broadcast cash, beggars belief. No player will clock up more than 180 minutes across three matches in seven days. That means two full matches and a 20 minute cameo is permitted. Oh and during this 30-day window no player can be selected in more than six matches.

The Pro 14 displayed enough sense to rule out midweek matches. And still, as rugby dives into winter and beyond even Leinster and their normal use of 50-plus bodies year-in year-out could break 60.

Don’t expect any excuses from Cullen. Leinster are fielding three separate teams in training ground matches of late. Established internationals will become understudies. For the restart they went for a backrow of Caelan Doris, Jack Conan and Josh van der Flier with Will Connors and Max Deegan on the bench.

The other provincial coaches will aim to avoid a good moan but at least one of the squads will be ravaged by injuries.

When it comes to Andy Farrell’s Ireland, the best player is not automatically guaranteed selection but the durable will always start. Debate should be raging over Garry Ringrose’s midfield partner yet, in reality, it’s the most able bodied from Ringrose, Robbie Henshaw and Chris Farrell who gets capped alongside Bundee Aki.

Speaking of Mr Aki, Connacht coach Andy Friend described the bundle of muscle as “a caged animal” who has been “locked up for five months” ahead of his 100th cap on Sunday.

The departure of 16 players since March suggests that Friend has had enough of the mediocrity that has pursued the province since winning the Pro 12 in 2016. Australian flanker Colby Fainga’a, having earned a lucrative switch to Lyon, will be truly missed, although Conor Oliver, a small but pure openside, arrives from Munster.

Last season Friend made it clear that Connacht need to be “bigger and stronger” to compete for the playoffs.

“We bought some size that we are really happy with,” said the genial Australian. “Abraham Papali’i is a big bodied man. Niall Murray has come up from our academy and put on six kilos over the break. So have others; Paul Boyle has put on size, Eoin Masterson has put on size. Pretty much across the board the guys are in better physical condition, with a lot more lean muscle mass than what we had previously.”

Any player worth their salt improved his physique during lockdown. Papali’i is a crash test dummy from Rugby League while Ben O’Donnell was plucked off the Sevens circuit, and he hasn’t arrived yet. Dress it up anyway you like but both men have been recruited from different sports.

Ulster looked in promising shape until the loss of captain Iain Henderson and the classy Will Addison to injury. Ian Madigan and Alby Mathewson add quality behind incumbent halfbacks Billy Burns and John Cooney but considering Madigan was unable to command the 10 jersey at Bordeaux and Bristol, perhaps the 31-year-old can improve Dwayne Peel’s attack from midfield or fullback.

Munster are heavily reliant on JJ Hanrahan to kick the goals and turn guaranteed momentum supplied by World Cup winners Damian de Allende and Snyman into silverware. It’s a golden opportunity for the Kerry man.

Unseen hero: Nigel Carolan had plenty to offer as Ireland under-20s coach and Connacht are presumably grooming him to eventually take over from Andy Friend.

Prediction: This squad will struggle to cope with concurrent runs in the Pro 14 and Champions Cup. Career-defining campaigns for Gavin Thornbury and Ultan Dillane, same goes for Jack Carty.

Unseen hero: Since sustaining a career-ending head injury on the 2017 Lions tour, Jared Payne has quietly morphed into an excellent defensive coach.

Prediction: A Champions Cup semi-final – if Toulouse can be caught cold – and Pro 14 finalist. Same again next season

Star man: Craig Casey looks the real deal and Matt Gallagher’s dad was a great All Black but everyone is leaning on RG Snyman.

Star man: James Ryan. For 2018 to be repeated the star performer must be shared between Sexton, Ringrose, Larmour, Doris and Leavy.

Unseen hero: Scott Fardy has been outstanding in the games people tend not to watch but head of athletic performance Charlie Higgins is a key component in UCD.

1 Seán O’Brien: Anger over my parents’ break-up never left me
2 Limerick score 36 points to overpower Tony Kelly’s solo act
3 Mayo relegated for first time in 23 years after pulsating Tyrone encounter
4 Dan Martin back to third in Vuelta after a wet and wild Stage 6
5 Vardy returns to plague Arsenal with late show from the bench
Real news has value SUBSCRIBE

Ronan Finn on why Shamrock Rovers are worthy champions 22:00
Vardy returns to plague Arsenal with late show from the bench 21:58
Jamie Vardy comes on to score winner at Arsenal 21:41
Limerick score 36 points to overpower Tony Kelly’s solo act 19:48
Rusty Ireland see ‘glass half full’ after overcoming Italy 19:33
Here is your handy guide to sport on television this week