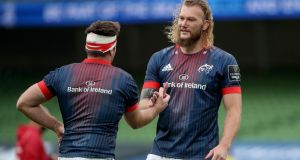 In fairness to the lads, they were models in regard to their social distancing. As eir Sport finally got some payback for having the television rights to the Pro14 match between Leinster and Munster at an eerily quiet Aviva Stadium, you’d swear old warhorses Tommy Bowe, Gordon D’Arcy and Peter Stringer had never been in each others’ company before they kept so far apart.

Anyway, their pre-match strategising from down on the pitch was eerie enough in itself, what with the gap they religiously kept between one another, but just in case we missed the point, main man Bowe was intent on letting the viewer know that this latest battle between the two provincial giants was unlike any other. “No atmosphere . . . (a) little bit strange . . . so eerie . . . eerie, strange feel.”

And, in the build-up to the match, much of the trio’s preoccupation was with a certain Springbok World Cup winner who, crowd or no crowd, was the centre of attention.

'You might not see it at home but there’s a stare-off, he’s not happy with where the touch has been awarded'

Bowe described RG Snyman as a “6’ 9” monster,” positively drooling as he saw the South African’s pre-match warm-up including the sort of passing more usually associated with an outhalf. “You don’t see many secondrows spin passing like that,” remarked Tommy and not even attempting to hide his envy.

“How can they utilise him to make space?” wondered D’Arcy and, indeed, that was a question that we hoped would be answered on the pitch, with Stringer opining “guys have got to hit the ground running” on the long-awaited return of competitive rugby in the truncated season.

Of course, Leinster-Munster matches have their own DNA and match commentator Connor Morris - “this is quite unlike any of the previous (matches)” - informed us of the drawing power of the two, providing the nugget that close to one million spectators had seen the two powers face-off in the decade of matches since their memorable Croke Park showdown of 2009. All of which put the empty seats and deafening quietness in perspective for this latest instalment.

For those fans confined to settling in on their living room sofas, the attention soon swung back to the towering presence of Snyman. A “wrecking ball enforcer” is how Morris described him, while sidekick Liam Toland was intent on adding to the legend.

“He’s quite a scary looking character,” said Toland, only for the commentary team to be left, as Morris put it, “reeling,” when Snyman’s game was done and dusted with just seven minutes and 14 seconds of the match gone.

“His lifters need to be much stronger . . . if he’s that brave to go up,” said Toland in a tut-tut way of how Snyman was allowed to fall too easily to ground and suffering what appeared like a serious leg injury. That Dave Kilcoyne hobbled off at the same time was given its own kind of social distancing, barely mentioned in passing.

The two boys in the commentary booth seemed to be enjoying their return to real live sport and that Leinster and Munster had brought plenty of intensity to the game. “You might not see it at home but there’s a stare-off, he’s not happy with where the touch has been (awarded),” said a gleeful Toland as Jonny Sexton didn’t require any sound effects to let touch judge George Clancy not he wasn’t impressed at all with his eyesight in determining where the ball had crossed the line.

By half-time, the socially distanced trio were back for some analysis. “We’ve had to watch soccer players with their hairbands falling out, not here,” enthused Bowe of the bone-crunching intensity which the two teams had brought to the affair.

And as the second-half worked through similar intensity, both Morris and Toland were gushing of “guile” and “world class” tries - in the cases of James Lowe and Keith Earls - although, it was Devin Toner, not long back from the sin bin, who made as big a contribution with an intercept. “He went all the way down from 6’ 10” to his bootstraps,” gasped Morris of the outrageous steal by Toner to take Leinster out of their own half and provide some much-needed breathing space.

And when it was all done and dusted, Morris reflected on a “topsy-turvy thriller of a game” that brought a little bit of normality back in that Leinster maintained that winning sequence of pre-Covid into the new normal of playing behind-closed-doors.