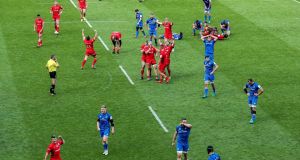 The Pro14 resumes this weekend with a series of derbies that will not involve cross-border travel before the playoffs on the first two weekends of September. Whether it can be played to a conclusion will hinge on who makes it through and, if matches involve teams from different countries, whether government restrictions would involve the away team having to quarantine.

That would mean game over and it is a problem the organisers of the European Champions Cup and Challenge Cup are grappling with one month before the knockout stages of the tournaments are scheduled to be played. Three countries are involved, the UK, France and Ireland as well as three devolved governments, Northern Ireland, Scotland and Wales: teams from all four of the home unions are on the road in the knockout stages.

If the governments are not aligned, the competitions may have to be cancelled. As an example, Leinster are playing Saracens in Dublin in the first of the Champions Cup quarter-finals on September 19th. The current policy of the Irish Government for its citizens going abroad advises against non-essential travel overseas, something that includes the UK, but not Northern Ireland.

From August 4th, Ireland has given 10 countries a green rating, meaning anyone arriving in the country from any of them will not have to restrict their movements on entry; Britain is not among them. It means that Saracens would not be allowed in without going into quarantine as elite sportsmen and women have not been offered an exemption, although sports’ associations are pressing for one to be made and expect a response within days: the Republic of Ireland’s football team, which contains several players based in England, starts training for its Nations Cup match against Bulgaria this month.

Castres take on Leicester in the last of the Challenge Cup quarter-finals at Welford Road. France is among the countries on the quarantine list in the UK: anyone arriving from there has to go into isolation for 14 days, which would not be an option for a club that the week before will have been involved in a Top 14 round.

Unlike Ireland, and France, where Toulouse face Ulster in the Champions Cup while in the Challenge Cup Bordeaux-Bègles take on Edinburgh and Toulon entertain the Scarlets, the British government has granted an exemption from the quarantine requirement to elite sport, which applies to the devolved governments, as long as every step has been taken to ensure the travelling players, coaches and staff are Covid-free. It would mean Castres having to arrange a chartered flight to avoid mixing with travellers, an increased cost that can be met for a one-off occasion but in the Pro14, when the new season starts in October, it will be every other week except in the derby season.

The British government agreed to the exemption after lobbying from the Rugby Football Union which is part of an eight-nation tournament in November and December when, again, cross-border travel will be unavoidable. It would be sabotaged were players obliged to quarantine for two weeks, but if Ireland and France do not make the same concession, the two European tournaments will very likely have to be called off because there is no time for matches to be rearranged or the schedule for the new Pro14 campaign to be redrafted.

The UK government’s policy has a number of conditions, one of which is the existence of any local or regional lockdown measures and consideration of how these may change planned accommodation, training, transportation, and match fixtures. Leicester is currently in lockdown, although restrictions have started to ease.

It shows the current difficulty of organising a cross-border tournament. Football’s Champions and Europa Leagues are being played to a conclusion because teams in the competitions are gathered in one country having all finished their domestic tournaments. It is not an option open to rugby union with the Premiership running into the fourth week of October and the Pro14 starting a week after the European finals having wrapped up the 2019-20 season the week before the Champions and Challenge cups resume.

The venues for the European finals still have to be decided: with no spectators allowed except in France, tickets cannot be sold and a decision can be left until the finalists are known, but when fans are allowed back in, will away supporters able to travel to watch club matches in Europe – and the Six Nations, the start of which is less than six months away? Packed houses seem a long way off.

All European Professional Club Rugby can do is wait and listen to the travel updates from the Irish and French governments, territory and venue dependent. With fans not allowed to watch matches in the UK or Ireland (even print media will not be allowed into the Aviva Stadium for Pro14’s return while 5,000 spectators are permitted in France), they can make a decision later rather than sooner but with a health official in France saying this week that a second wave of coronavirus had started in and around Paris and that the second worst affected area in the country was Marseilles, the city the Scarlets would ordinarily fly into, sport will not be high on its agenda.

Ireland this week tightened internal restrictions after a rise in the number of positive tests. The Pro14 has a decision to make about the two South African teams who play in the league and next year’s Lions tour there is prey to the universal rules on distancing and gathering: if it happens, it is unlikely to have much of a missionary element. The pandemic has exposed a lack of sustainability in professional rugby, but at least clubs in England and France have only one government to deal with and can plan with a trace of certainty. Those involved in border crossings cannot. - Guardian