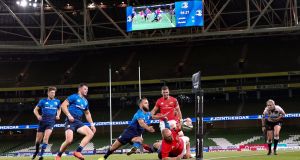 Munster’s Keith Earls gets over in the corner for a try during the Guinness Pro 14 game against Leinster at the Aviva Stadium. Photograph: Billy Stickland/Inpho

There was a touching moment during the early skirmishes of Irish rugby’s successful relaunch at the Aviva. After CJ Stander rocketed off the scrum and rammed his shoulder into Johnny Sexton’s face, the South African wore a vicious smile as his international captain shrugged off medical attention.

Serious injury to one of the star attractions was the only way this old derby could leave a sour taste in our mouths.

Munster have already put Joey Carbery on ice “indefinitely” – JJ Hanrahan had an impressive night, second only to Sexton in the outhalf stakes – while Jack O’Donoghue (concussion), James Cronin (groin) and seven quarantined players were already out of Johann van Graan’s strategic reach.

That was enough uncontrollable problems. Everyone was excited to see the mammoth RG Snyman begin a rigorous examination of Rónan Kelleher’s throwing.

“He stole that lineout,” said Van Graan, “it went from absolute athleticism in the air to despair literally half a second later.”

The expected prognosis following Snyman’s eighth-minute collapse to earth, when he mangled his left knee, is a long lay off. At best, the towering 25-year-old lock might return in November when South Africa recall him and Damian de Allende for the Rugby Championship in New Zealand. At worst he has torn a cruciate ligament.

But it was the sight of their hobbled African giant that must have Munster folk whispering about Biddy Early and piseogs. The province has failed to unearth modern versions of O’Gara and O’Connell but the real curse is terrible injuries to the gifted players they cleverly recruited from foreign fields.

“It’s a big worry for us,” Van Graan admitted.

That Munster managed to drag Leinster into an enthralling duel, ultimately decided by the single missed kick at goal from 10 attempts on both sides, is of enormous credit to their healthy players.

Hanrahan was charged with levelling matters, after Andrew Conway’s nimbly taken second try on 72 minutes, but he couldn’t repeat the dead-eye accuracy shown up until that high-pressure moment.

The Kerry man did allay concerns about his ability to live with Sexton, who in turn produced an unbelievably impressive display despite six months mostly working on his biceps.

Nothing should surprise us about the 35-year-old Leinster man anymore but Hanrahan also produced his full bag of tricks, especially the out in front pass for Keith Earls’s brilliant try in the left corner.

The difference between the teams for many years now was evident again: Munster had 61 per cent territory while Leinster scored whenever they entered the opposition 22 (Saracens will put Cian Healy’s mauled try under the microscope).

But this battle – when we consider the loss of so many key Munster forwards – felt like a new beginning. The rivalry still has a chance of breaking even in a fortnight’s time, providing Munster overwhelm Connacht this weekend and reaches the Pro 14 semi-final. A draw would do them.

“I thought there was a lot of sting in that performance from our side,” Van Graan continued. “I thought there’s a lot more positives than negatives. Even at 24-13, when we had Rory Scannell go into the scrum, I was impressed by the composure from the game-drivers.

“You don’t come to the Aviva Stadium, where Leinster are unbeaten in over 20 games now, and push them as close [without playing well]. Incredibly disappointed to lose, to not come away with at least a draw, but that’s rugby and you’ve got to be resilient in times like these.”

“I thought the first 38 minutes of the game we played really well, we controlled the tempo. We gave away two penalties there, they scored with that kick in behind us which we went from 13-10 up to 17-13 down at half-time.”

The Leinster try seconds before the interval was a beautiful party piece by Robbie Henshaw, grubbering in behind the red line for Garry Ringrose to squeeze past Chris Farrell and score.

“I’ll take the first 38 minutes as a real positive, the way we stayed in the game. We kept our composure, we’d an opportunity to draw it with two minutes to play. I thought we contested the lineout pretty well, the breakdown battle was huge.”

Sexton had a more accurate description for the breakdown:

“It was chaos. We couldn’t seem to get any flow into our game.”

The failure of referee Andrew Brace to stamp his authority on the tackle area led to warranted criticism. But the officials need a break too. Six months and some mind-bending Zoom tutorials from Joe Schmidt – World Rugby’s chief ruck inspector – and clearly the breakdown and offside line cannot be policed by one pair of eyes.

Life as a rugby coach is nothing if not cruel.

Do not be surprised to see Leinster and Ulster field the rest of their 40-odd panels when they meet next weekend. Another blood and guts fixture is not what the doctors are ordering before the non-stop knockout rugby begins.

Munster, however, must go full throttle. They have a maximum of three games left in their season, which is really a pre-season before the 2020/21 campaign begins on October 2nd.

Sexton had his revenge for Stander’s touching up and a dunt in the back by De Allende with a guttural ‘yahoo!’ when assisting the fantastic Josh van der Flier to stand up Farrell at a key juncture in the second half. That turnover led directly to Ryan Baird creating James Lowe’s runaway try.

Leicester go top at halfway point; It’s not the time for IRFU to be slashing salaries 06:54
Gordon D’Arcy: Time for IRFU to be bold and secure futures of prized playing assets 06:00
Van Graan outlines challenge Munster faces against Leinster’s ‘pressurised game’ 06:00
Bundee Aki’s Connacht return could come against Ospreys on Sunday 06:00
Seán Moran: Improvisation may be on the cards again for fixture makers 06:00
Here is your handy guide to sport on television this week