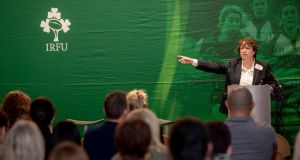 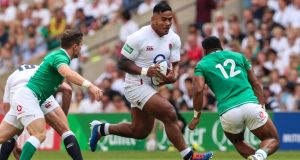 England centre Manu Tuilagi is on the look out for a new club. Photograph: Billy Stickland/Inpho

The women’s game has always been way, way down the list of priorities at the IRFU and the current financial crisis gives them plenty of scope to keep it that way.

Female rugby in Ireland needs protecting now more than ever. Plans are in place for an expanded All-Ireland League. But plans no longer carry much weight. Take the stalled qualifying tournament to reach next year’s World Cup in New Zealand. Plans for the Six Nations are also up in the air.

On June 10th the IRFU wrote to clubs with female teams to confirm that a newly formatted AIL will happen this season. It is still listed as “eight to 10” sides with no relegation for two seasons and the promise of “increased funding” for clubs that participate.

Sounds like a plan – until we read the rest of the letter signed off by Collie McEntee, the IRFU’s director of rugby development. There was a “sustainable clubs health check” form attached to “evaluate a club’s current or aspirational participation in women’s rugby.” Fair enough, better find out which clubs can gather a squad. “The IRFU is committed to driving sustainability and growth in the female game in Ireland,” the letter added without providing any guidance on how this might be done.

The lack of genuine female representation in the decision-making process remains a major barrier blocking progress. That means tapping into the vast knowledge of recently retired players who understand what is needed.

Mary Quinn’s IRFU women’s committee met last week. People on the ground await any sign of leadership from Quinn. We’ve seen none since she became the first female appointed to the IRFU executive in 2015.

Most people seem to agree the way forward is a vibrant club scene rather than mimicking the men’s provincial system. Old Belvedere – a pillar of women’s rugby in Ireland - are currently seeking a new head coach. That appointment alone will provide an indication of the AIL’s wellbeing.

“The doping control officer kept samples in his house overnight. There were tests done on a Wednesday and he kept everything together with him because he had to ship everything together in one batch. How can you keep something like that in your own fridge at home? We believe that’s against any testing protocol.” Springbok hooker Chiliboy Ralepelle intends to appeal an eight-year ban following his third positive test in nine years.

65 - Metres from which Jordie Barrett penalty sails over during the Hurricanes 25-18 victory over the Chiefs in Super Rugby Aotearoa.

Warren Gatland is not thinking about the British and Irish Lions tour of South Africa - starting this time next year - as the day job has become a bit of a nightmare.

Three losing bonus points in four straight defeats has the Waikato Chiefs stumbling into their Super Rugby gap week. Makes you wonder whether ‘Gats’ has bitten off more than he can chew. He has balanced two major international roles in the past and with incoming All Blacks captain Sam Cane leading the Chiefs, the former Ireland coach should reverse the current losing streak before switching gigs next year to prepare the Lions.

Seems like they are all double-jobbing this weather. England head coach Eddie Jones is currently focused on being Director of Rugby role at Suntory Sungoliath. Seemingly, Jones has been based in Japan these past four months, even playing a role in securing the signature of Beauden Barrett, the latest southern hemisphere star to commit to a Japanese team for 2021.

We doubt Andy Farrell’s current employers would allow him to take a nixer.

Tuilagi and Noel Reid for hire

Speaking of cashing in, Leicester Tigers inability to secure an agreement from Manu Tuilagi to swallow a drastic salary reduction - caused by you know what - has alerted the Japanese market to his availability.

Reports suggest Tuilagi would command €850,000 salary but that means the 29-year-old misses out on England selection. Rules are rules.

Japanese club rugby would certainly suit the silky skills of Noel Reid. The former Leinster centre was also stood down by the Tigers last week after refusing to sign new terms.

The alternative is France but the smart club owners are going to low ball any player, even one of Tuilagi’s stature, seeking a deal in the middle of July. That’s just sound business. Of course, rugby rarely works off the numbers actually adding up.

Over to the billionaires: “Somebody contacted me about him last year,” Mohed Altrad, the owner of Montpellier, told the Mail on Sunday. “The calculations show that he would be away for half of the season so it doesn’t work as an investment. It’s a big move for him to stop playing for his country.”

Either way, there are two primo No 12’s for hire. One being slightly more expensive than the other.

Madigan has Ireland caps in sight; view from Melbourne’s second lockdown 07:06
View from Melbourne: Sporting fabric of the city suffering from second lockdown 06:30
Madigan’s primary goal is Ireland caps after switch to Ulster 06:00
Seán Moran: It won’t take much before cancelling All-Ireland looks like a solution 06:00
My sporting disappointment: Battered, bloodied, broken by The Wall 06:00
Crossword Get access to over 6,000 interactive crosswords