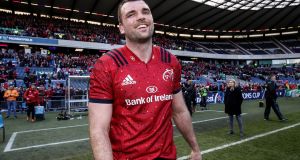 Munster’s Tadhg Beirne has extended his contract with the province. Photograph: Dan Sheridan/Inpho

Munster and the IRFU have confirmed that Tadhg Beirne has signed a two-year contract extension that will see him remain with the province until June 2022.

The versatile Ireland international who joined Munster on a two-year deal last summer has now committed to the province for a further two years.

In starting 18 of his 20 appearances to-date, the 27-year-old lock has also scored two tries. He also won man of the match awards at home and away against Exeter Chiefs in the Champions Cup, and against Leinster, Ospreys and Connacht in the Guinness Pro14.

On the international stage, Beirne has five Ireland caps, and made his Six Nations debut starting against Wales in March.

Meanwhile academy scrumhalf Craig Casey will advance to a development contract at the start of next season, moving to a full contract at the beginning of the 2020-21 season.

He played a leading role in the Ireland Under-20s Grand Slam winning campaign - named as squad vice-captain, he started against France, Italy and England, and scored two tries. The 20-year-old was named Munster academy Player of the Year before going on to make his Pro14 debut as a replacement against Connacht in Thomond Park.

1 Tipping Point: DeChambeau’s transformation raises questions, but who will ask them?
2 Monica Seles: The warrior queen who could have been the best ever
3 Patrick Mahomes reported to have signed 10-year $400m deal with Chiefs
4 Mental clarity in chaos: Novak Djokovic, the man who turned two into three
5 Rory McIlroy's hot and cold putting still his nemesis
Real news has value SUBSCRIBE