Recently opened 62,000-capacity ground will be most recent soccer stadium to host finals 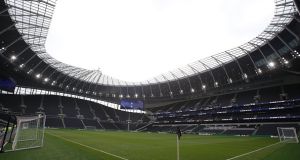 The recently opened 62,000-capacity ground will follow the likes of Newcastle’s St James’ Park — venue for this weekend’s finals — Bilbao and Lyon in staging the showpiece occasions. Next year’s hosts will be Marseille.

It will be the seventh European Cup final to be played in England, and the first to held in London other than at Twickenham.

“We are excited to have been selected to host this prestigious weekend, the pinnacle of European club rugby, in 2021, and to have this opportunity to welcome EPCR and rugby fans from around the world to Tottenham to experience our new home,” Spurs chairman Daniel Levy said.

“These games will add to the portfolio of world-class sporting and entertainment events our multi-use venue will stage in this new leisure destination for London.”

The stadium features a fully-retractable grass pitch, with an artificial surface underneath which will be used when it hosts NFL games.

It’s understood that the rugby finals will be played on grass. It also has a 17,500-seat single tier stand - the largest in the United Kingdom.

EPCR chairman Simon Halliday said: “We are very excited to be taking the best club rugby in the world to such an innovative and exciting stadium.

“There is already a real buzz about the Tottenham Hotspur Stadium, and it will continue the theme of new experiences for our fans in dynamic stadiums that can generate the kind of exceptional atmosphere that has become the hallmark of the Heineken Champions Cup.”