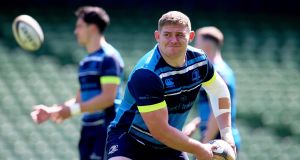 Tadhg Furlong: his return to his best form is highly encouraging for Leinster prior to their final clash with Saracens. Photograph: Tommy Dickson/Inpho

Earmarked for Test status by Joe Schmidt years before his debut against Wales in August 2015, the investment began to pay rich dividends from Chicago 2016 onwards (only his second Test start). Occasional scrum lapses have been eradicated. A human wrecking ball on his day, and deft hands too – witness that pirouette and transfer to Bundee Aki in the Twickenham Grand Slam coronation.

In New Zealand two summers ago, Vunipola was on his second Lions tour but generously says of Furlong: “If I am being honest, he surprised me in the way he was such a big guy and his set-piece stuff was solid, but around the park I couldn’t believe how hard he worked. In my eyes, I thought ‘I think I am alright at this.’ Then you see that and you are like: ‘Oh, no I am not.’ So it kind of gives you a bit of motivation to push yourself and that is what you get with good players.”

Furlong is a seriously good player and his return to his best form is encouraging for Leinster in their drive for five.

The pride of Horsewood and New Ross RFC, as well as Good Counsel, is “from a humble farming background” as he likes to put it, and namely the parish of Campile in County Wexford.

“We’ve a family farm there. It’s just off the coast and near the border with Waterford. Growing up, it was probably the same as most every other child in Ireland. I’ve got one brother and my father has a farm. He used to own a butcher shop.

“My father would have got out of the butcher shop when I was quite young but people would still drop up deer or something else to cut up. You’d always give him a hand with something like that. The auld fella is quite handy with a knife so it’s good for the turkey dinner, boned and rolled meat. It’s nearly a work of art!”

He likes to wryly contrast his roots with those of the mostly middle-class products of fee-paying rugby-playing schools in Leinster’s ranks.

“Mucking around with the father, or out bating a hurling ball off the back wall, it was normal for me, but a bit different to some of the rugby lads and how they would have grown up.”

An ever-present in successive Lions Test series, such was the improvement in Vunipola’s scrummaging that having struggled at scrum time in his one start in the second Test in Australia, he started all three against the All Blacks.

Such are his surprisingly good footwork and handling skills for a big man that Saracens use him as something of a playmaker while his huge work-rate makes him akin to an extra loose forward, witness that haul of 27 tackles in his 77 minute shift against Ireland at the Aviva in early February.

After also starring in the win over France a week later, England badly missed him when he was ruled him out of the remainder of the Six Nations with an ankle injury. His return for the semi-final was a huge boost for Saracens.

Now reaching the prime of his career.

Mako, short for Makovina, was born in Wellington. His, and Billy’s, father Fe’ao captained Tonga and appeared at the 1995 and 1999 World Cups, before moving with his family to Wales to play for Pontypool.

Educated in Newport, at Castle School, Bristol and at Millfield in Street, he joined Saracens from Bristol in 2011 after a stand-out English underage career and was given his English debut by Stuart Lancaster in the first autumn Test of 2012 against Fiji.

“I got on well with Mako,” says Furlong.

“He’s good craic. When we were over there we roomed with the props and hookers to try to build relationships. I got stuck in a room with Mako a few times which I enjoyed. He’s a pretty laid-back character. He’s a horrendous snorer so it can be tough that way with him. But most of the time he was asleep so I didn’t get much chat out of him.”

Stuart Lancaster knows Leinster’s strength in depth will be key in busy schedule 05:30
Corofin’s quality won’t have chance to shine on biggest stage 05:00
Heroic insanity: When Michael Dunlop raced home in memory of his father 05:00
Gerry Thornley: Consistent trailblazers New Zealand once again ahead of the posse 01:00
Manchester United huff and puff their way into semi-finals 22:51
Crossword Get access to over 6,000 interactive crosswords