Numbers prove Leinster and Saracens match up well on paper 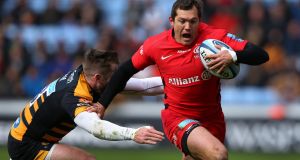 Alex Goode has carried the ball more than any other Saracens player in this year’s European Champions Cup. Photograph: Alex Livesey/Getty Images

Interpretation is nine-tenths of the law so to speak when it comes to statistics, more often than not governed by the subjectivity in arguing one perspective.

The jumble of figures, percentages and grades that are bound together in a volume of performance data that relates directly to Saturday’s Champions Cup final and specifically to how Leinster and Saracens compare across a number of categories provides a colour by numbers canvas.

The graphic reveals the respective team averages for the 2018-2019 European campaign across eight matches but what is missing is where they rank across the 20 competing teams; context to go with the statistics. Saracens have the number one ranked lineout in this season’s Champions Cup (95 per cent) with England international George Kruis their go-to man leading the way having won 33 (in seven matches).

Leinster are not dissimilar in the way they set-up with their secondrows as primary option. Devin Toner – he calls the lineouts for the defending champions, a role Kruis fulfils with Saracens – tops the charts for Leinster with 26 wins (six matches) while James Ryan has been the most successful on opposition throws, managing to filch three balls (eight games).

Scott Fardy (12 won), Rhys Ruddock (11) and number eight Jack Conan (eight) have also provided semi-regular source material at lineout time; Leinster’s 85 per cent success rate ranks them 11th of the 20 teams. So far so superficial, but of arguably more direct relevance, is the importance of Saracens’ lineout maul as a core and hugely effective attacking gambit.

They’ve demonstrated this repeatedly in both the English Premiership and the Champions Cup to telling effect.

Inevitably there will be comparisons drawn between Ryan and Itoje two of the outstanding young locks in the modern game and in perusing several of the categories the influence they bring to bear on matches is obvious.

Ryan has carried more ball (120) than any other Leinster player, on 40 more occasions than the leading Saracens player, fullback Alex Goode and double the figure of Itoje (60), albeit that the England international has played two matches less (six) in this year’s tournament.

It’s quite remarkable how Ryan has honed and developed his game as a primary carrier for his team in such a short space of time with little or no diminution in the impact he has in other aspects of the game. He also leads the tackle count (123), 37 more than the highest ranked Saracens player, hooker Jamie George. Ryan’s capacity to find space where none appears to exist, even if it’s half a metre over the gain-line will be fully tested against a Saracens defence that bristles with aggression. To check that line speed where possible it’s important that the Leinster carrier is neither isolated nor readily identifiable.

There are red flags from a Leinster perspective on the perils of a loose kicking game or being brittle in the tackle as Goode has beaten more defenders (35), right wing Sean Maitland has managed the most clean breaks (nine) and left wing Liam Williams has made more offloads (eight) as the leading lights in those categories playing in Saturday’s final at St James’ Park.

Another central tenet to Saracens playbook is their kicking game and they put boot to ball more often than any team in the tournament, averaging 24.8 per match. Owen Farrell varies that aspect of the game nicely with cross-kicks, dinks in behind and also in establishing field position.

Scrumhalf Ben Spencer gave a box-kicking master-class against Munster in the semi-final and that allied to his sharpness underlines why he has started more matches in the tournament than England international Richard Wigglesworth.

Leinster have conceded less turnovers (11.3) than any other team in the tournament, they have the second best tackle completion rate (88%) and also conceded less penalties (7.0) on average through the eight matches; second overall in the standings.

The teams match-up well on paper and one suspects that will be the case on grass too come Saturday.