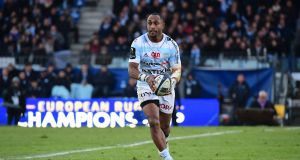 Joe Rokocoko reckons Leinster will have enogh to see off Saracens in the Champions Cup final. Photo: Dave Winter/Icon Sport

Racing 92’s former All Black wing Joe Rokocoko has faced both Saracens (2016) and Leinster (2018) in Champions Cup finals and in his experience he feels that the Irish province is the more rounded team and therefore the tougher opponents.

Owen Farrell kicked all of Saracens points in a 21-9 win over Racing 92 while the French club again didn’t concede a try in last year’s final but lost out 15-12. He explained: “They (Leinster) are such an intelligent team. They have great forwards and once they start getting momentum, it’s a long day for anyone who comes across them.

“Saracens were very good in defence and very technical. They went with their kicking strengths. Leinster have a lot more options, running options. When conditions come into it they can change their game up.

“They (Leinster) bring a lot more. The hard thing is that despite all the video analysis you do during the week they can come up with a different move from their back pocket.”

The greening of Saracens part III

Paul Wallace, the middle brother of the three Ireland and Lions internationals, Richard (older) and David (younger) is the most celebrated player to have played for both Saracens and Leinster who meet in Saturday’s Champions Cup final at St James’ Park in Newcastle.

The 47-year-old former tighthead prop won 46 caps for Ireland, scoring five tries, making his debut at the 1995 Rugby World Cup in South Africa and his final appearance against Georgia in 2002. Having played a couple of seasons with Blackrock College in the AIL he moved to Saracens in 1996 and spent five years there and the following season was joined at the London club by his brother Richard, a winger.

Richard Wallace won 29 Irish caps and had been called out to the 1993 Lions tour to New Zealand as a replacement for the injured England wing Ian Hunter. He spent two seasons at Saracens scoring 11 tries in 25 appearances.

Paul was an integral part of the Lions 2-1 test series victory over South Africa (1997) and was singled out by the tourists’ captain, England’s Martin Johnson as his player of the series for the manner in which he handled the gargantuan Os du Randt in the scrums.

The Irish prop suffered a badly broken ankle in a Heineken Cup match against Ulster at Ravenhill in January 2001 and at the end of that season signed for Leinster with whom he won a Celtic League title, making 24 appearances over two seasons before retiring.

Morrow has Saracens in train

One of Mark McCall’s lieutenants in the backroom team is fellow Ulsterman Philip Morrow who has overseen the strength and conditioning programme since he joined Saracens in 2011. Morrow began his career with the Ulster Rugby Academy in 2001 before being appointed National Academy Fitness Manager working with the Ireland U19 and U21 sides.

In October 2003 he took up the post of Head of Strength and Conditioning with Ulster and in 2008, he became the IRFU’s High Performance Fitness Manager, a role he fulfilled until after the 2011 Rugby World Cup in New Zealand. He is a graduate of the University of Ulster where he gained a Masters in Sports and Exercise.

Morrow was seconded onto Warren Gatland’s Lions backroom team for the 2017 tour to New Zealand. McCall has said of his compatriot: “He’s the best in his field. Phil controls a lot of what happens at the club, in terms of training loads and game minutes.”

640: The number of minutes that Leinster’s Jordan Larmour has played in this season’s Champions Cup campaign.

“Leinster have got strength across the park and they’re prepared to go an inch at a time and gain lots of phases, we’ve seen it so often when they’ve gone 30-odd phases to score. So they’ll ask lots of questions of Saracens.” – Glasgow Warriors coach Dave Rennie whose team was beaten three times by Saracens this season in Europe.