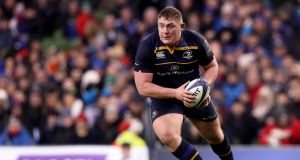 Tadhg Furlong: “When you look at the two teams it will be up there with international standard rugby with the number of Test players there.”

Whatever about pitting former room mates as well as teammates together, rare indeed is the Heineken Champions Cup final that pits the incumbent Lions tight-head against the incumbent Lions loose-head. Of all the duels which could make the St James’ Park earth tremble, Tadhg Furlong v Mako Vunipola is right up there.

That said, regarding their duel at scrum time, Furlong maintains: “It is a question you get asked quite a bit. Going against him in the scrum, the game has changed so much in terms of scrummaging within the last two years. What we were talking about on the Lions tour, in terms of what we wanted to achieve in the scrum and the way we went about it, is may be not the case anymore.

“Mako is word class in what he does. He has had a few injury problems this year but he has come back and looked really fresh. His ability to attack the gain-line, his ability to bring others into the game, his footwork, late at the line; he is a quality player to be fair to him. Sarries use him in set piece moves and he is a player I enjoy watching.”

The manner in which Saracens put Glasgow and Munster – two sides Leinster know well – to the sword commands respect.

“You look at the scrum, they put Munster under pressure a fair few times,” says Furlong. “Knowing the Munster lads well, knowing how hard it is to do that to them, the way they nullified Munster’s threats in some respects and the way they were able to hold on to the ball, build pressure and score points was a quality performance.

“I always enjoy watching Saracens play. Some of the ball-players they use off ‘9’, some of the shapes off ‘10’ that they run – it’s very hard to defend. They have runners out the back as well. They have plenty of pace and flair out wide.”

“Obviously I got to work with a hell of a lot of their players on the Lions tour and I learned a lot from Maro [Itoje] and George Kruis in how they run a lineout, how efficient they are in that area.

“People like Mako and Jamie [George] I worked with very closely in the scrum. I have a massive amount of respect for the way they play the game, the efficiency of it and how, when they have teams under the pump, they go for the jugular.”

The last time a chunk from each of these sides squared off, England came off the better in England’s 32-20 win at the Aviva Stadium on the opening weekend of the Six Nations.

The elder Vunipola was England’s leading ball carrier that day with 11 and by some distance their leading tackler, with a phenomenal haul of 27 tackles.

“Mako played well that day to be fair,” admits Furlong. “Can I remember as good a performance from a prop? I didn’t go through it with a fine toothcomb and go over Mako’s game in all the small detail so it is hard to comment on that.”

“It is never nice to lose a game at home,” admits Furlong. “Do we bring some hurt and anger into this game? Not necessarily. They are two different set-ups, different coaching teams. There are definitely lessons we can learn. They have influential players – [Owen] Farrell at ‘10’ and the front five are more or less what we played that day. But hurt? Not necessarily.”

Furlong also knows the intensity and physicality of this final will be as close to a Test match as makes no difference.

“Yes, I would say so. The Toulouse game was like a Test, bloody tough and you had to work hard to nullify some of their threats. When you get to the business end of a competition like this it is like international rugby.”

“What is the difference between club and international rugby? Sometimes when you are playing for your club, there tends to be a few more scrums and mauls, it can be that little bit tighter quarters, if you know what I mean.

“International rugby drains that physical energy from you a bit more. It is a lot quicker, tougher on the lungs and the legs. When you look at the two teams it will be up there with international standard rugby with the number of Test players there.”

Another aspect of this thunderous-looking final which excites Furlong is the venue, and the prospect of playing at another famous football stadium.

“The final last year in Bilbao springs to mind,” he says dryly when asked if he’d played in any before. “The Ricoh Arena? Ospreys as well – that’s a dual stadium. St James’ Park is a pretty iconic place. I grew up watching Match of the Day and seeing Alan Shearer score a load of goals there and putting the hand up and running around. I can’t wait to experience playing a game there.”