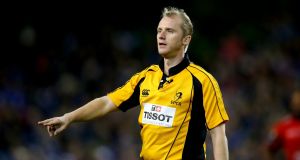 Ulster will have Welsh referee Ben Whitehouse in charge for their opening match in this season’s Champions Cup when Wasps visit the Kingspan stadium on Friday, October 13th. Whitehouse officiates in the Guinness Pro14 and will be familiar with the home side.

England’s Wayne Barnes will take charge of Leinster’s clash with Montpellier at the RDS the following day while his compatriot Matthew Carley will preside when Munster head for the Stade Pierre Antoine to meet Castres Olympique later that day.

Ireland’s John Lacey will have the whistle for Racing 92’s home game against the Leicester Tigers while compatriot Andrew Brace, a promising young referee, has been pencilled in for the Ospreys clash with Clermont Auvergne at the Liberty stadium. England’s Tom Foley takes charge of Connacht’s Challenge Cup game in round one when the Irish province travel to Oyonnax.

Irish referees George Clancy, Frank Murphy, Sean Gallagher and David Wilkinson are in charge of Challenge Cup games in round one while Wilkinson and Murphy have also been allotted matches in round two.

In round two of the Champions Cup Jerome Garces will be in charge when Leinster travel to Scotstoun to face the Glasgow Warriors, JP Doyle officiates when Munster host Racing 92 at Thomond Park and Nigel Owens referees Ulster’s trip to La Rochelle.

Clancy will be in charge of the Leicester Tigers game against Castres while Lacey will be the man in the middle when Montpellier host the Exeter Chiefs. Ian Davies (Wales) will referee Connacht’s game against the Worcester Warriors.