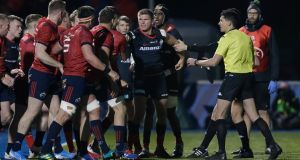 Munster and Saracens were involved in a 30-man brawl on Saturday. Photograph: Henry Browne/Getty

European Rugby have confirmed they will investigate the incident which sparked a 30-man brawl between Munster and Saracens players during Saturday’s Champions Cup fixture at Allianz Park.

Tempers flared in the second half of the European champions 15-6 victory after Munster medic Dr Jamie Kearns said something to Jamie George.

Saracens director of rugby Mark McCall said afterwards that Kearns had said something “horrible” to the England hooker, sparking a reaction which saw both sides involved in a melee which spilled over the sidelines.

McCall later said Saracens were deciding whether or not to make an official complaint over the incident: “Clearly this shouldn’t happen, we all know that. I don’t think what was said to Jamie was good at all. It started a 30-man brawl.

“Owen Farrell got penalised for running into the melee but from what I saw 29 other people ran into it!

“It was a strange penalty to give and it was instigated by a member of their staff who said something horrible to one of our players.

“Something pretty bad was said at Jamie. He wouldn’t have reacted the way he reacted otherwise. We’ll take our time to decide whether we do anything.”

And on Sunday morning the EPCR confirmed they would be investigating the incident themselves. A statement read: “EPCR has decided to investigate incidents which occurred during the second half of the Heineken Champions Cup, Round 4 match between Saracens and Munster Rugby at Allianz Park yesterday (Saturday, 14 December).

“Information will now be sought from the match officials and from both clubs, and EPCR will be making no further comment until the investigation has been completed.”