Rob Kearney left out of Ireland squad get together 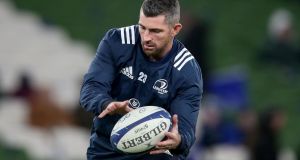 Leinster’s Rob Kearney has not been included for the Ireland squad get together next week. Photo: Bryan Keane/Inpho

New dawn, new Rugby World Cup cycle, new head coach, new base, new lingo, new way of doing things. The Andy Farrell era is up and running after the recently installed Irish head coach unveiled a 45-man squad for Ireland’s first get-together under his watch which, as much as anything, has seemingly wiped the slate clean.

In the process, while many players will see the door has opened for them, others will believe that it has closed, either temporarily or permanently.

Into the latter category perhaps might fall Rob Kearney, assuredly the most capped and most notable omission, whose ambition of reaching 100 caps (he’s currently on 98, including three for the Lions) may now be just beyond reach. Not that one of the most decorated players in the history of Irish rugby might see it that way.

As well as playing in three World Cups and 11 Six Nations Championships, Kearney is the only Irish player who started all 20 games in the Grand Slams of 2009 and 2018, as well as the back-to-back titles of 2014 and 2015. The retired Rory Best also played in all 20, although was a replacement in four of them.

The only other player from the original 31-man World Cup squad not currently injured who was not included in yesterday’s list is Jack Carty, whose post-World Cup dip in form has seen him lose out to Stephen Fitzgerald as the first-choice Connacht outhalf.

The others who were in the 31-man squad and were not included in this 45-man list are Seán Cronin, John Ryan, Tadhg Beirne and Jack Conan. The absence of Beirne was confirmed as being down to injury on Monday night with the news that he will require surgery on a fractured ankle after he was stretchered off in the 11th minute of their defeat by Saracens on Saturday. Jordi Murphy, called up as a late replacement in Japan for Conan, is another high profile omission, as is the injured Jack McGrath.

Some of those who were in the expanded 45-man squad for the World Cup only to miss the cut are back, notably Devin Toner, as well as Rob Herring, Ultan Dillane, John Cooney, Ross Byrne, Mike Haley, Dave Kearney and Will Addison.

The other four capped players for whom the door has re-opened are Dave Heffernan, Marty Moore, Quinn Roux and Stuart McCloskey.

The 45-man squad and back-up staff will assemble in Dublin on the 22nd and 23rd December, ie next Sunday and Monday, but rather than a get-together the ‘New Ireland Coaching Group will host’ what has been labeled – cue drum roll – ‘a 24-hour mid-season Stocktake’.

There will also be a new base, with the squad assembling next Sunday in the IRFU High Performance Centre in the Sport Ireland Campus in Abbotstown.

But this wording, along with the composition of the squad, does rather suggest that this 45-man squad has a somewhat experimental feel to it. The coaching group clearly want to have a look at some fresh faces, while also sending out a signal that form will be rewarded. But are there other players not in this 45-man list who might re-appear at the end of January for the pre-Six Nations camp in the Algarve? Almost certainly.

Nevertheless, in another sign of the changing times, whereas previous Irish head coaches were aghast at any attempt to draw demarcation lines along provincial boundaries – perish the thought – here they have been listed on exactly those lines.

In the release, Farrell was quoted as saying: “The national coaches have been around the provinces watching games and having good conversations with players and the provincial coaches.

“We have limited opportunities across the busy provincial season to bring a broad group like this together but this 24hr window will allow us to plant a few seeds. It will also give the coaches a better insight into a few players who been performing consistently well for their provinces.

“The next six weeks is the window for players to put their hands up for selection for our first squad which will be named in late January ahead of the Six Nations.”