Stuart Lancaster on the secret to player development at Leinster 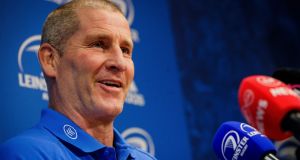 Leinster’s ability to maintain an unbeaten start to the season will lean heavily on their extended squad and academy players during the next three match block in the Guinness Pro14 over the Christmas and New Year period. That begins on Friday night with a game against Ulster at the RDS, continues with a trip to Thomond Park and ends with a home fixture against Connacht.

The Leinster players involved in Ireland’s World Cup squad are likely to be rested for two of the three matches as part of the national player management programme and it will be at the discretion of Leinster head coach Leo Cullen to decide what way he shuffles his resources.

The performances of young players like Caelan Doris and Ciaran Frawley, who were involved in the weekend victory over the Northampton Saints, reflects positively not just on the development pathway in the academy but also the integration of that talent into matchday squads in a measured manner.

Stuart Lancaster explained: “The secret to player development is, number one, having talented players which Leinster currently have and should always have because of the fantastic system coming through from both schools and clubs.    “Two is having a very good academy. Three, the piece that people don’t understand is the connection between the academy and the senior team. There must have been 50-55 players at the review [of the Saints’ match on Monday morning] of which only 23 played in the game. All 55 are learning. There were a few that have not actually played for Leinster yet.

“That’s how a Caelan Doris comes through; I have been coaching Caelan for nearly four years, so it’s no surprise. It’s no surprise in the way that Harry Byrne or Tommy O’Brien or these lads are progressing through. They are the next cabs off the rank, so to speak. It has happened by design.”

Jordan Larmour’s man-of-the-match performance against Northampton was a celebration of his broken-field running but Lancaster highlighted other areas that were pleasing in the fullback’s display, saying there is no-one better when attacking a disjointed defensive system.

“He is exceptional really. The most pleasing thing in his growth has not just been his counter-attacking – it is his ability to “positionally” be more effective as a defender, understanding the role of a 15 within our defensive system. In an ideal world, any quality 15 should be covering the backfield so when a kick is made, he catches it without it even bouncing. He is learning those things. There’s still one or two things he wants to work on from the weekend which I pointed out to him.

“He has an ability to work off the ball well; he’s got not just speed and good ability to step, he’s got speed endurance as well. I have coached fullbacks and back-three players in the past that can do what Jordan can do. But then they are exhausted, because they are these fast-twitch fibre athletes, whereas Jordan can do that and he can do it again and again. That speed endurance in a back-three player, I think, is critical and he’s got that.”

Lancaster said that the review of the Northampton win focused on the many positive aspects of the performance – especially the tries, which were achieved by capitalising on turnovers from good defence.

“I think the big thing for us is to keep improving on both sides of the ball. We were asked to step up in defence because of the quality of the attacking team. I think we did that, even though we conceded three tries which is very frustrating. The challenges Northampton gave us will stand to us in the future.

“Attack-wise we saw some good tries of first phase. Our ball control was better, but not perfect; by ball control, I mean retaining possession in the key moment and not gift an offload away or lose a breakdown turnover. Some of our kick chase could be improved. So lots of little things, really.”

Leinster’s senior coach confirmed that Johnny Sexton will return to see the specialist before the new year and that the outhalf will “get an assessment from him [the specialist] and he will give a more definite guideline about when his [Sexton’s] return to play will be.”

Ross Byrne picked up a dead leg and was replaced by Ciaran Frawley on 47 minutes of the victory over the Saints in the Aviva stadium with the latter likely to start against Ulster. Hooker Ronan Kelleher (hand) will be out of action for four to six weeks while secondrow Ross Molony, who picked up a foot issue against the Glasgow Warriors, will return to training next week.

1 Monica Seles: The warrior queen who could have been the best ever
2 Leicester seek to flatten their dismal curve and end season on a high
3 World Athletics freezes out Russian athletes after $5m fine goes unpaid
4 Welcome to Iten in Kenya – home of champions and cheats
5 Premier League team news, statistics and TV times
Real news has value SUBSCRIBE