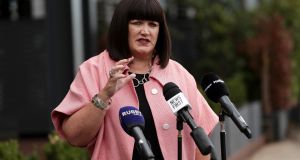 In the wake of Raelene Castle resigning as chief executive of Rugby Australia, it has emerged that increased security was needed to protect her following a death threat last year.

The threat came from an Israel Folau supporter on Facebook. Folau, who had been the Wallabies’ highest paid player, was dismissed following a second Instagram post condemning homosexuals and other sinners to “hell” unless they “repent”.

The subsequent employment case was settled out of court, with RA paying Folau off to avoid an expensive trial, but last May there was genuine concern that the person who made the threat or another individual would try to enter the governing body’s headquarters in Sydney. Staff were ordered not to leave any doors open on the lower level of the building and security was improved at Castle’s home in Sydney.

“I’m aware of some of the things that were said over a period of time in a quite vicious and vitriolic way,” said RA chairman Paul McLean following Castle’s resignation last Thursday after she learned from McLean that the board no longer supported her as chief executive. “It’s the silent forces, the dark forces, they’re the things that upset me most. It’s the people who didn’t know the facts or were just one of those faceless people out there – that was the damaging thing from her perspective. She shared some of that with me, which I found quite abhorrent.

“One of my greatest concerns with her was her welfare and how she was on a daily basis. A lesser person would have thrown the towel in ages ago, quite simply.”

Castle – the first woman and New Zealander to lead Australian rugby – has faced constant criticism from ex-Wallabies since being appointed ahead of former hooker Phil Kearns in December 2017.

On top of the Folau controversy, she was unable to secure a new multi-million dollar broadcast deal. There was the very public disintegration of her relationship with former Australia head coach Michael Cheika and issues arose with the players’ union, led by one-time Ulster lock Justin Harrison, when she did not include Harrison in initial Covid-19 crisis talks.

Ireland’s two-Test tour of Australia in July is due to be formally cancelled this week and the Wallabies’ November fixture in Dublin is also unlikely to happen.

RA finances appear to be the worst of all tier one nations with World Rugby set to provide a €9 million loan. Despite securing €7 million in savings on player wages, with Castle taking a 65 per cent pay cut, 10 ex-Wallaby captains last week called for her removal along with the recently altered board.

There were initially 11 signatures but Michael Lynagh withdrew his name.

This revolt, led by Nick Farr-Jones and including Kearns, was met with resistance from several high-profile figures in Australia, most notably John Eales, but Castle’s position still became untenable.

“It has been made clear to me that the board believes my no longer being the CEO would help give them the clear air they believe they need,” said Castle.

The New Zealand rugby union took the highly unusual step of praising Castle’s two and half years in charge of Rugby Australia while respecting her “unselfish” decision to step aside.

“The Raelene Castle resignation is depressing,” tweeted Alison Donnelly, founder of scrumqueens.com, who also works for Sport England. “The most senior woman in our sport hounded out on the back of a crass campaign led by a load of men who offered no alternatives, no solutions. As is so often the case, everyone thinks they know better than the woman in charge.”

1 Next stop the Champs-Elysées in green for Sam Bennett
2 Saracens’ emphatic opening salvo enough to keep Leinster at bay
3 Born to ride, born to win: Sam Bennett, the making of a green machine
4 Lance Armstrong’s latest move serving him well on many fronts
5 Saracens deliver the brutal blueprint on how to beat Leinster
Real news has value SUBSCRIBE