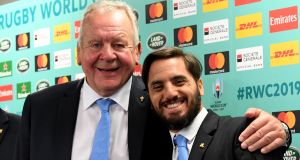 On Sunday, World Rugby will elect its chairman for the next four years. In the past, this event has held about as much interest for rugby people as a box full of hammers.

The chairman of World Rugby was seen as a bit like the Pope. A distant, respected figure, who talks from on high, while the rugby faithful sell raffle tickets to support their club.

Today’s financial crisis has shoved this election into the face of every rugby community.

Rugby in the southern hemisphere is close to open revolt against World Rugby’s annual playing calendar, which is disproportionally influenced by the English and French clubs.

The current global playing calendar is an unholy mess, concocted over several decades of concessions to the English and French clubs by World Rugby’s European-dominated political ruling class.

While coronavirus has exposed many national unions’ broken business models, it has also poured much needed sunlight on the cause, which is the financial unsustainability of the global playing calendars.

There are too many unprofitable club games and not enough profitable international fixtures. For the first time, the rugby public understands that World Rugby must reform the global playing calendar or the game, as we know it, will perish.

World Rugby’s internal machinations are like those of the Catholic Church. There is political battle taking place between those who are fighting for reform against those whose power lies in maintaining the status quo – not the way things should be.

The current chairman, Bill Beaumont, is standing for re-election. He was nominated by the French Federation.

His nominated vice-chairman is the current president of the French Rugby Federation, Bernard Laporte, who was nominated by the English Rugby Football Union.

You don’t need to be Sherlock Holmes to see the pattern of nominations, as Beaumont’s and Laporte’s power bases lie deep inside the English and French club system.

As vice-chairman, Pichot has seen the World Rugby system from the inside and understands it requires reforming.

He is proposing a new global playing calendar that supports both hemispheres. One that is made more financially sustainable for the national unions by increasing the number of international matches, the only profitable area of rugby.

Crucially, Pichot wants to limit the number of games a professional player can play in a calendar year.

Pichot told me that the exact number of games will be found by “working with and talking to the players, to get the balance between the welfare and the economics. For me player safety comes first”.

In proposing direct communication with the players to set a maximum number of games they can play each year, he would be giving the players a long overdue voice in the decision making regarding their health.

All of this is kryptonite to the English and French clubs.

He also wants to reform the internal governance of World Rugby, as Europe commands a gerrymander-like control over the World Rugby electoral system.

Twenty-two of the 51 World Rugby votes are held in Europe. Little wonder that every World Rugby chairman has come from within the Six Nations since the game went professional

Pichot was nominated by Rugby Australia, who spent their last 75 cents on the stamp.

The smart money is on Beaumont to win but things can change quickly.

It has emerged in the last week or so that the chairman of the Fiji Rugby Union, Francis Kean, who seconded Beaumont’s nomination, was convicted of manslaughter in 2007.

No, I am not making this up.

Kean has been forced to stand down after an open letter from the CEO of the Pacific Rugby Players Association, Dan Leo, brought to light Kean’s manslaughter conviction and the accusation of rampant homophobia while he was the senior administrator of the Fijian prison system. A position he was appointed to by . . . wait for it . . . his brother-in-law, the Fijian prime minister, Frank Bainimarama.

The same convicted killer who was placed in charge of the Fijian prison system – figure that one out – has been allowed to sit on the World Rugby council since May 2019.

An organisation that does not have the internal checks to stop a convicted killer from seconding the proposal of the chairman of World Rugby, who has sat on its decision-making council and was nominated by the possible vice-chairman to the executive committee, is a system that is obviously open to question.

Those who are resisting the obvious need for reform should hang their heads in shame.

Kean’s botched nomination to the executive committee was blatantly against rugby’s best interests.

The current rugby calendar and World Rugby’s governance are both against the best interests of global rugby.

World Rugby and Beaumont did pressurise Fijian Rugby to stand Kean down and condemn his alleged actions. Technically Beaumont’s nomination was from the Fijian Union, but the entire affair reeks of all that needs to change inside World Rugby.

Unsurprisingly, as I understand it, Ireland will vote for Beaumont and Laporte.

A few years ago Argentina astonished the old world by producing a papal reformist candidate, an agent of change, who navigated the conservative political conclave of the cardinals and was elected.

Pope Francis vanquished the Richelieus of his world.

It will take a miracle of equal proportions for Pichot to take on rugby’s old world and win.

As I remember, “Gus” was always up for a fight. I am going to say some rugby prayers and I hope to see white smoke, with a few light blue stripes.

1 Saracens’ emphatic opening salvo enough to keep Leinster at bay
2 Born to ride, born to win: Sam Bennett, the making of a green machine
3 Next stop the Champs-Elysées in green for Sam Bennett
4 Maro Itoje proves he has no peer in the northern hemisphere
5 Garry Ringrose: Leinster’s defeat to Saracens is ‘heartbeaking’
Real news has value SUBSCRIBE