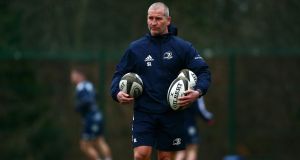 If the British and Irish Lions are allowed to tour the currently Covid-riddled South Africa next summer, Stuart Lancaster hopes to be part of Warren Gatland’s coaching ticket.

“I’ve caught up with him a few times,” said Lancaster on Monday afternoon. “Obviously I coached against him for England since 2012 so I know him pretty well but he definitely didn’t offer me a role with the Lions.

“His next step would be to come back from New Zealand, speak to the CEOs of the unions and see which of the international coaches would be available.

“Would I be interested? Of course, as a coach you want to coach at the highest level, coach the best players and I don’t think it gets any higher than coaching the Lions against the current world champions but it’s speculation for the time being.”

In between confirming the laser focus of Fergus McFadden and Rob Kearney to finish their Leinster careers with another set of medals – “I think you know the two characters; they are not going to wave a white flag and say ‘my time is done’” – Lancaster applied the brakes on Dan Leavy facing Munster on Saturday week at the Aviva stadium.

“Dan is getting closer but he will still probably be a week or two. To have that length of an injury [17 MONTHS]it is probably unrealistic to come back in and play a game without having a few full weeks of training. But he has done brilliantly.”

The current lockdown across the Leinster midlands has brought a renewed emphasis on the entire playing group to adhere to the strictest possible guidelines to ensure that professional rugby returns to Dublin on August 22nd.

“We recognise the responsibility. It is getting so close now that everyone just wants to get to the game and make sure it passes without incident off the field so we can all enjoy watching live rugby in Ireland again.

“We want to get through this final hurdle and make sure we don’t compromise anything. Be reassured it is top of the list.”

“It’s critical [Leinster hit the ground running],” said Lancaster. “If you go through the timeline, we go: Munster, massive interpro game and they need to beat us because they want a home semi-final, then Ulster who are flying at the moment and made some great recruitment as have Munster.

“Then we’ve got a Pro 14 semi-final, we need to win that in order to get to a Pro 14 final. If we manage to win those games, then you’ve got to follow a Pro 14 final with a European Cup quarter-final against Saracens and a week after that you’ve to play a European Cup semi-final against Clermont or Racing. So, it’s a pretty unique scenario where you have to peak right at the start of the season and deliver and win.

“The closest comparison I can make is that it’s a bit like a World Cup in that you’ve got to win your pool games, then you’ve got to win a quarter and semi-final. The difference is this time you’ve to do it without any warm-up games.”

If that sounds hectic, consider a potentially dangerous decision by the English Premiership to complete all nine outstanding rounds of the 2020 season from this weekend until October 4th before playoff semi-finals and final.

How, for example, would the Englishman guide the larger Leinster squad through such a treacherous schedule?

“You can’t roll out Saturday-Wednesday, Saturday-Wednesday all of the time so you would have to utilise the squad. We had 41 training today and there’s probably going to be a couple more tomorrow. I would trust all those players to play at that level because our youngest players are 20, 21, 22-years-old. That’s our youngest players. And they have all had experience playing Pro 14.

“The challenge will come if you’re in a Premiership squad and your senior squad is on 35 and you’re suddenly looking at your youngest players being 18, 19. That’s the danger.

“It will be interesting to see how the dynamic works. From our point of view, we’re just pleased that the Pro 14 have made the decision that they’ve made [to shorten the season] and we can go Saturday, Saturday, Saturday.”

Lancaster ended up covering every issue in the rugby universe, from CVC Capital Partners takeover of the professional game, to the rumoured return of Joe Schmidt, to the latest Leinster tighthead promoted in the wake of losing Jack Aungier to Connacht and Roman Salanoa to Munster.

“The real positive for me has been Tom Clarkson,” said Lancaster of the Ireland under-20s prop. “Everyone has spoken highly of him but with Roman going he was brought up and he’s been excellent. He’s a really exciting tighthead prospect who is learning with the big guns and the units but in the rugby stuff, his attacking and defensive understanding and decision making in the game is excellent. He’s a real bonus.”

World Rugby are reportedly trying to recruit Schmidt as their newly invented Director of Rugby and High Performance.

“The sooner Joe’s back in the game the better really. He’ll have had plenty of offers, both within rugby in terms of coaching, or within the administration of the game because of his knowledge and intellect so it will be interesting what plays out.”

And, finally, Lancaster believes the deep pockets of private equity investment, having already pumped €5.5 million into the IRFU coffers, can only be a positive development.

“I think in the current financial climate everyone is very pleased, I’d imagine, because if that wasn’t there I think there is a big hole. As long as [CVC]are a force for good and their mindset is to improve the product, which I’m sure they do because that’s how they’re going to get a return on their investment, so I’d be definitely a pint half full on that.”