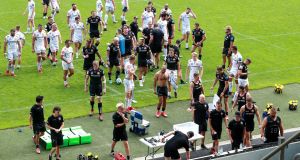 Exeter players leave the pitch after an inter-squad match in preparation for the new Premiership season. Photo: David Rogers/Getty Images

The Exeter chairman, Tony Rowe, has warned that some Premiership clubs may go bust if crowds are not allowed into stadiums before next year.

Exeter are the only Premiership club who have consistently made a profit in recent years but with Rowe revealing they are losing more than £1m (€1.1m) a month he fears for the survival of their rivals.

Premiership clubs still hope they can admit significantly reduced crowds before this season ends in October but the government’s U-turn on piloting small attendances at other sporting events has cast that into doubt. With a break of just four weeks before next season starts on November 20th it remains possible that that campaign will begin behind closed doors – a prospect that Rowe believes would push some clubs to the brink.

“I don’t think the rugby fraternity realise how much clubs are losing and it’s currently costing us just over a £1m a month to keep operating,” said Rowe, whose side return to action at home against Leicester on Saturday. “We still have to maintain all the infrastructure, as well as the playing side, so it’s been incredibly difficult.

“Most of the clubs will have worked out how long they can survive but, if we can’t get some decent revenue coming in by the new year, we’ve got serious problems. Here at Exeter, because we have been commercially sound for the last 20-odd years, we’re fortunate we’ve been able to lean back on some of our assets to help raise the funds we need to keep going, but I do fear for some of the other clubs.”

With Premiership players no longer eligible for the government’s furlough scheme, a new TV deal for next season yet to be agreed and, as first reported by the Observer, the Rugby Football Union set to slash its funding, the clubs have been losing huge sums of money with Leicester estimating a shortfall of more than £5m (€5.6m).

Despite Exeter’s previous financial success, Rowe revealed his club’s losses are similar, highlighting the absence of ticket revenue as the key factor. “Central funding is made up of TV, league sponsors and RFU money,” he said.

“However, the bigger money comes from bums on seats and if we can’t get spectators into the stadium, we’re all going to be in trouble.

“Sandy Park, as business, has already had to cancel over £1m in corporate business from banquets, conferences and dinners and right now I can’t see when they will come back, so it’s eating into our reserves pretty quickly. What was to a degree our ‘golden goose’ in having Sandy Park pay the bills and the overheads, whilst the match-days were the big earners, both of those income streams have currently gone.” – Guardian

1 Next stop the Champs-Elysées in green for Sam Bennett
2 Lance Armstrong’s latest move serving him well on many fronts
3 Saracens’ emphatic opening salvo enough to keep Leinster at bay
4 Born to ride, born to win: Sam Bennett, the making of a green machine
5 Saracens deliver the brutal blueprint on how to beat Leinster
Real news has value SUBSCRIBE